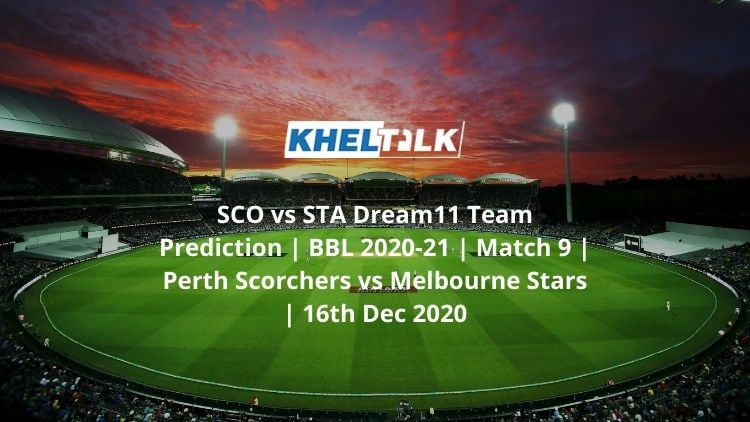 Perth Scorchers and Melbourne Stars will lock horns in the next fixture of BBL10. The match takes place in Launceston at the University of Tasmania Stadium on December 16. Melbourne Stars sits at the peak of the points table with two wins from two games, while Scorchers have grabbed the last spot with losing the opening game to Melbourne Renegades. Let’s go through our Dream11 Team Prediction for the upcoming BBL 2020-21 game between Perth Scorchers vs Melbourne Stars.

The wicket of the University of Tasmania keeps changing. Last season it favored the batsmen, let’s see how it turns out to be this season.

Colin Munro – New Zealand openers didn’t get runs in the last game but you cannot deny the fact that he is capable of making big hits and doing wonders up the order.

Marcus Stoinis- star of the last season has again shown his worth as he smashed 61 runs off 37 balls in the previous game. Not just with the bat, but his bowling skills have been lethal recently.

Adam Zampa bowled brilliantly last time out. He conceded 10 runs and bagged two wickets to help his team reach glory. This Australian internationals has an amazing series against India as well.

Jhye Richardson was economical with the ball in the previous game. Chipping two wickets from 3.3 overs and conceding just 20 runs speaks a lot about his skills and bowling variations.

SCO vs STA Dream11 Team Prediction: Who will win the match

Going by the winning streak, Stars surely have an upper hand here. They have won back to back games and will be eager to gram the third win in a row. Also, they have a better line up on the papers. Our Dream11 Team Prediction experts have predicted that it is going to be a close affair but Melbourne Stars will win the game.