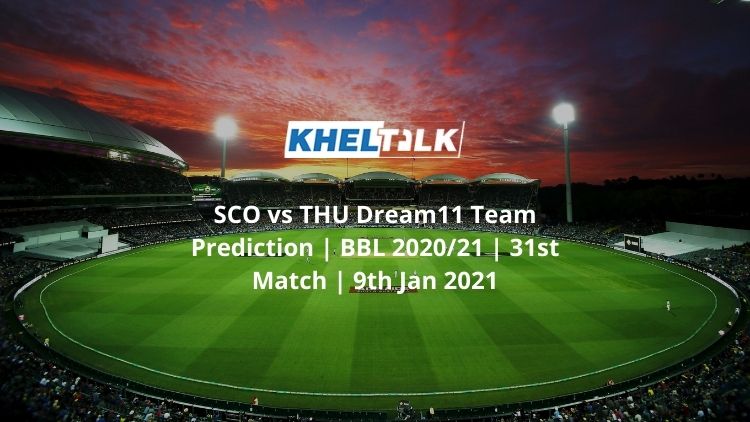 Perth Scorchers will host Sydney Thunder in the 34th match of the tournament. Both the teams will be coming into this contest after winning their previous match.

Scorchers provided a near-flawless performance to defeat the Sydney Sixers by 86 runs. Colin Munro’s half-century provided the platform for Mitchell Marsh to go out and smash every single delivery he faced. He ended up scoring 57* just 27 deliveries. In return, Andrew Tye’s 4-for and Jhye Richardson’s three wickets helped the team to win the match with ease. The team currently has 3 wins and 3 losses from their 7 games. They are still at 7th in the points table.

On the other hand, Sydney Thunder overcame Hurricanes’ challenge and won the match by 39 runs, thanks to the bowlers who ended up doing an excellent job and helped the team to defend 167 runs. They are currently at the top of the table with 6 wins to their name. Let’s go through our Dream11 Team Prediction for the upcoming game.

In the tournament, we have seen the teams preferring to bat first as the pitch tends to get slower with time, thereby making the chase difficult. In fact, the teams have struggled to reach 160 while chasing. We can expect the teams to opt for batting first once again.

Winners at this venue in the tournament

After a series of poor performances, Perth Scorchers are finally on the right track and have managed to win three matches in a row. In fact, they had rattled Sydney Sixers in their previous match and are looking like a different team altogether. When Mitchell Marsh stepped down from the captaincy because of the “baggage”, Ashton Turner was ready to take up the job with open hands and have proved his worth as the leader so far. Marsh, in a way, was right too at least it seems like it. One can confirm the same with the way he had played in the last game. If the team manage to continue similar performance today, they can take down Sydney Thunder too.

Sydney Thunder are currently at the top of the table and are undoubtedly one of the top teams who are in the race to win the trophy. Almost all the players in the team have managed to perform well in at least a match. The youngsters like Tanveer Sangha have used the opportunity right, and he is currently the leading wicket-taker of the tournament. In fact, the team has an excellent bowling line-up, starting from Chris Green to the latest Arjun Nair. However, their batting did let them down on multiple occasions, something Scorchers will be looking to explore here.

Alex Hales is one of the leading run-scorers in the tournament so far. He averages close to 35 and has 264 runs from 8 innings with a strike-rate of 168.15.

Tanveer Sangha has picked up wickets at regular intervals and is currently the leading wicket-taker of the tournament. He has 15 wickets from 8 matches with an economy rate lesser than 7.3.

SCO vs THU Dream11 Team Prediction: Who will win the match

While Sydney Thunder is the favorites to win this match, Perth Scorchers are looking like a different team, especially, in their last three matches. Also, the toss will play a crucial role here and the team that is batting first will have the upper hand. Tanveer Sangha will be the player to watch out for in this contest. If Scorchers can tackle him, they have a great chance of winning this match too.