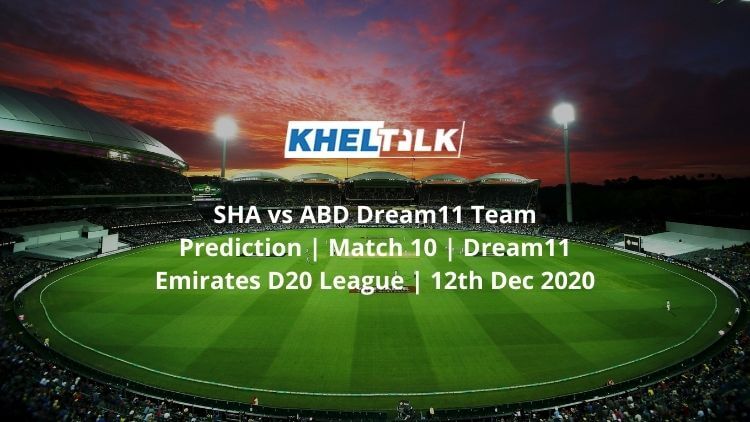 Sharjah Bukhatir XI will take on Abu Dhabi in the 10th match of the tournament. Abu Dhabi is yet to open their account as of Thursday and are at the bottom of the table. They looked down and out in both the matches and have lost their previous match to Ajman Alubond by 70 runs.

On the other hand, Sharjah Bukhatir XI has won one and lost one from their two matches and is at the 4th position. They began their tournament with a heartbreaking loss to Fujairah Pacific Ventures by 10 runs but had managed to pull off a brilliant chase against Ajman Alubond and won the match by 6 wickets. Let’s go through our Dream11 Team Prediction for the upcoming game of Dream11 Emirates D20 League.

The conditions will assist both the batsmen and the bowlers in phases. While the bowlers have had the upper hand during the initial stages, the batsmen have found it easier to score in the death overs.

Fayyaz Ahmed has led the team from the front very well. He so far has 78 runs from his 2 outings. He has a strike-rate close to 137 and can contribute with the ball too.

Midhun Sudhakar Pattlikkadan has contributed both with bat and ball in the tournament so far. He has 4 wickets with an economy rate lesser than 7 and also has scored 42 runs.

Kashif Daud played the main role in Sharjah’s win over Ajman. He ended up with the figures of 1 for 12 from his 4 overs. In the tournament so far, he has 30 runs with the bat as well.

Khalid Shah will open the innings for Sharjah. In both the matches, he has managed to score 30+ but couldn’t convert them to a half-century. In the last match, he smashed 30 from just 14 deliveries.

SHA vs ABD Team11 Team Prediction: Who will win the match

The team SHA is looking like a formidable side compared to the team ABD. Though team SHA will begin this contest as the favorite, one cannot take the team ABD lightly because of the experienced players in the line-up. Our Dream11 Team Prediction has a great level of success in the ongoing league and users can trust them going ahead.