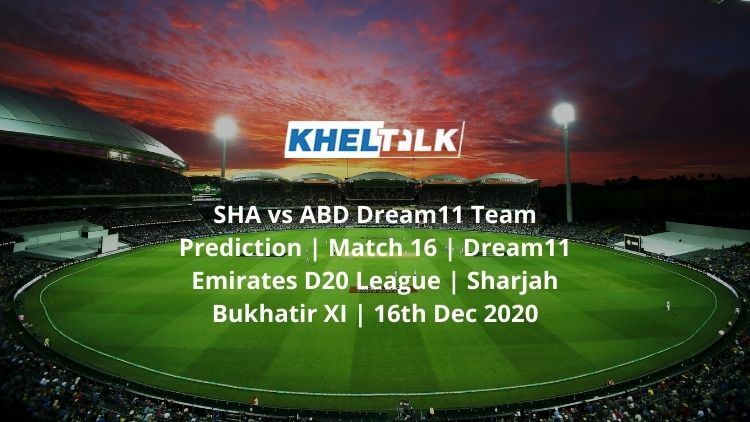 Sharjah Bukhatir XI will take on Abu Dhabi in the 16th match of the tournament. As of Monday, Abu Dhabi have lost all their matches and are yet to open their account. Though the players have done well in parts, they haven’t really clicked as a team yet. On the other hand, Sharjah Bukhatir XI are having a good tournament so far and have won two out their three matches. Their only loss came against the table-toppers Fujairah Pacific Ventures. Even in that match, the team had almost pulled off a good chase and it was unfortunate that they fell ten runs short of the target. Let’s go through our Dream11 Team Prediction for the upcoming game in Dream11 Emirates D20 League between SHA and ABD.

Pitch Condition:
The pitch has something for both the bowlers and the batsmen. The batsmen have struggled to time the ball initially but as the innings progressed, the batting became easier. Most of the teams have preferred batting second at this venue.

Total matches played so far in the tournament – 12

Kashif Daud has done well with the ball and has picked up five wickets in the tournament so far as of Monday. He also has a couple of cameos to his name.

Navalesh Naidoo is the best bowler in the Abu Dhabi team. He has five wickets in the tournament so far with an economy rate of 7.82. He can also contribute with the bat.

Mazhar Bashir has the most runs among the batsmen in Abu Dhabi side. He has scored 105 runs from his 5 outings with the strike-rate close to 120.

Khalid Shah looked in good form in all the three matches in the tournament but couldn’t convert his scores. In one of the matches, he smashed 30 from just 14 deliveries.

SHA vs ABD Team11 Team Prediction: Who will win the match

Going by the form, Sharjah are likely to win this game as well. The Abu Dhabi team needs something special from someone to stay in the match. Also, when these two teams met earlier in the tournament, Sharjah pulled off a win with ease. Our Dream11 Team Prediction experts feel that it is going to be a cracking contest.