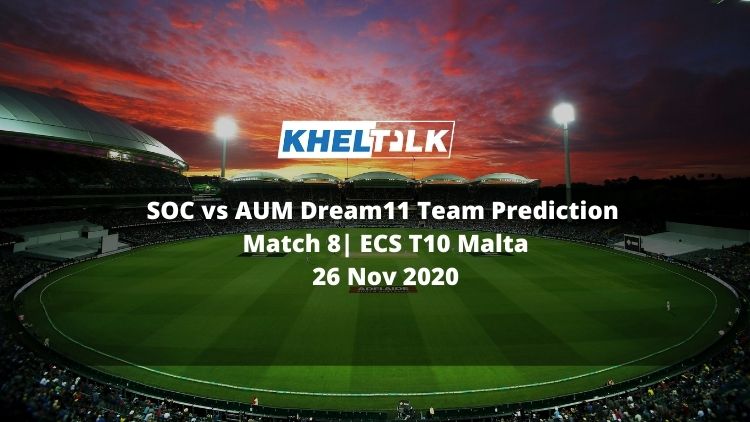 The 8th match in the ECS T10 Malta will be played between Southern Crusaders CC vs Atlas UTC Knights CC on November 26 at Marsa Sports Club, Malta. SOC has won both their game so far while AUM has played one match which was abandoned. So let’s look at the SOC vs AUM Test Match Dream11 Team Prediction, Top Captain & Vice-Captain Picks, Head to Head, Grand League, and Fantasy Tips.

The track has been a great one for the batters and expects the same in this game too. The batters will find it easy to score runs on this ground.

93 (In previous encounters at this venue)

G Thakur is the most consistent batsman for his team so far in this league. He has scored runs in all games he has batted in so far and hence is very reliable. In the first game he scored 40 runs from 23 balls and then in the second game he continued his purple patch and added another 23 runs from 19 balls. He now has 63 runs in 2 games and is the leading run-getter for his team.

R Basitansz is a solid batter and has all the gears in his game which makes him the ideal player to bat in the middle overs. He can play the waiting game and rotate the strike and has the big shots to finish the innings in the death overs. He scored 30 runs in just 13 balls in the first game and now in this match, he will be expected to repeat his heroics.

E Masih is a high-quality bowler and has all the variations to trouble the batsmen. He was wicket-less in the first game but then bounced back well in the second game and ended up with 2 wickets. Considering his bowling form he is a very good choice for vice-captain.

J Thomas bowled 2 overs in the last game and gave away only 9 runs. He was very effective in the match and claimed 2 wickets as well. He is a genuine wicket-taker and hence he can be relied on to claim more wickets in this match.

SOC vs AUM Dream11 Prediction: Who will win the match

SOC has been the best team in this tournament so far. So they are the favorites to win this game.