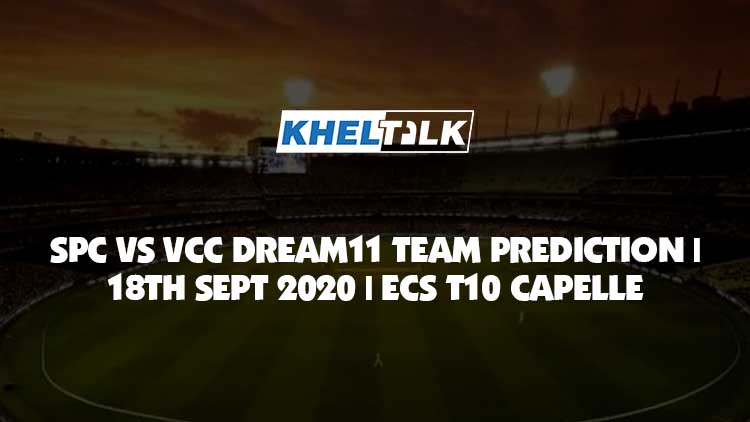 We are here to give a brief review over SPC vs VCC Dream 11 Prediction for the upcoming match. The user will surely get the necessary help by using out advice while picking a fantasy team.

The 11th fixture of European Cricket Series Capelle, 2020 will be played between Sparta Cricket 1888 and Voorburg Cricket Club on 18th Sept, i.e on Friday. After back to back wins, Sparta Cricket couldn’t hold on their momentum for long and were handed over their first defeat of the tournament by Excelsior 20 by 7 wickets. At present, Sparta Cricket sits on the second stop of the standing with three wins in four games.

On the other hand, Voorburg Cricket Club is yet to open their account as they lay at the bottom of the points table.  Hopefully, this time they would come up a lucky playing 11 that can twist their fortune for the rest of the tournament.

In the initial games, the surface was seen giving advantages to the batsmen but most of the games played yesterday had seen bowlers on the superior side.

Coming at number 2, Bas de Leede has the highest run-scorer in the tournament so far with 114 runs from 3 games. His consistency towards the game makes him an ideal choice as Captain.

He has scored maximum runs for Sparta and is expected to remain in form. In 4 games, he has got 87 runs along with 3 wickets to his name.

Another reliable Sparta player you can pick is Tim de Kok. Having an average of 28.00, he has scored 84 runs in 4 innings. He can play a blinder on him.

He has been economical with the ball for Sparta. Bowling 2.3 overs, he has conceded 31 runs with 2 wickets scalped. A favorable choice as vice-captain.

SPC vs VCC Dream11 Prediction: Who will win the match:

According to us, Sparta clearly stands ahead of VCC. Having won three out of four games, Sparta would again step up with an intention of gifting another defeat to Voorburg. Hence, we bet on Sparta Clun 1888.