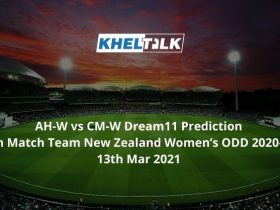 Delhi Capitals is one of the very few teams to carry on with their form from the last season where they ended up as the runners up. So far, Delhi has done well and is one of the three teams to win three or more matches in this edition. Their only loss came against Rajasthan Royals.

On the other hand, Sunrisers Hyderabad went down thrice in the tournament and had finally found a way to win a match in IPL 2021, thanks to their top order. SRH made a few changes in the last match and it looks like the changes had worked for them. They are currently in 7th place.

SRH will go into this contest with a winning momentum for the first time and they will be motivated by the fact that they have more wins against Delhi Capitals in the head to head. Both teams have played 18 times and SRH have won 11 times.

Apart from that one match where RCB went berserk, thanks to Maxwell and de Villiers, Chennai has been a low-scoring pitch with most of the matches are being dominated by the team batting first and in the 2nd innings, the slow bowlers, especially the spinners had success. So far, most of the matches here are won by the team batting first and the average first innings score in this tournament is 141.

Without doubts, it is going to be a hot and humid day in Chennai, in fact, the climate will be hotter than what we had witnessed in recent games. The climate is likely to reach 33 degrees Celcius in the afternoon and is likely to fall to 30-29 degrees Celcius during the match time. The dew factor will play a major role here and the wicket will be sticky.

We can expect a good contest here. Both teams have good spinners and they will play major role today. Shikhar Dhawan, Jonny Bairstow, Kane Williamson are must-have picks from the batting side while Rashid Khan and Avesh Khan are mandatory on the bowlers’ side.

Delhi might aim to bring Anrich Nortje for this game as he had tested negative a week ago. However, it is difficult to create a space for him in the line-up as all the four overseas players are doing well for the team at the moment. Amit Mishra once again will hold the key in the bowling attack for the team.

SRH will enter into this contest without Natarajan and Bhuvneshwar Kumar. Natarajan has been ruled out of the IPL 2021 due to knee injury while Bhuvneshwar Kumar has injured his thigh in the last match but there is no official announcement regarding his injury but is likely to miss this game and Sandeep Sharma is likely to replace him in the playing eleven.

Jonny Bairstow is in excellent form at the moment and is the leading run-scorer for SRH at the moment. He has managed to score a couple of fifties in the tournament and was the player of the match in the last outing. He so far has 173 runs with the strike rate close to 132.

David Warner will look to lead his team from the front here. Warner so far has 130 runs with a half-century to his name. Though he is far from his usual best, he still can prove vital in this contest. In the last edition, he had two 40-plus scores against DC.

Prithvi Shaw began the tournament well with a massive half-century but couldn’t convert his starts to big score since then. Considering that he is a good player of spin, one can expect him to do well against SRH at this venue. He so far has 113 runs to his name.

Kane Williamson was the difference in the last match for the SRH team. Though he didn’t score a lot, he made sure that the team doesn’t fall back after a good start. One can expect him to hold the middle order together in this match too.

Amit Mishra will enjoy bowling at this venue once again. He so far has four wickets to his name and can prove vital in this contest. Similarly, Rashid Khan is the other spinner who is a must-have in your fantasy team.

Here is the Dream 11 Team prediction for SRH vs DC. We are going with players who are currently in good form and can win the match with ease.

Head To Head Team For Sunrisers Hyderabad vs Delhi Capitals

Who Will Win Today Between SRH vs DC Dream11 Prediction, Match 20?

According to Kheltalk’s astrology SRH vs DC Dream11 match Prediction, SRH will win the match. While this looks unlikely at the moment, SRH will enter this contest as favourites because of their head to head wins. Also, a lot depends on the SRH’s top order as well as Rashid Khan to take them home. For Delhi, Shikhar Dhawan holds the key.

According to Kheltalk’s SRH vs DC Dream11 toss prediction, Sunrisers Hyderabad will win the toss and are likely to opt to bat first at this venue. Since the team has good number of spinners, bowling second will work for them in this venue.