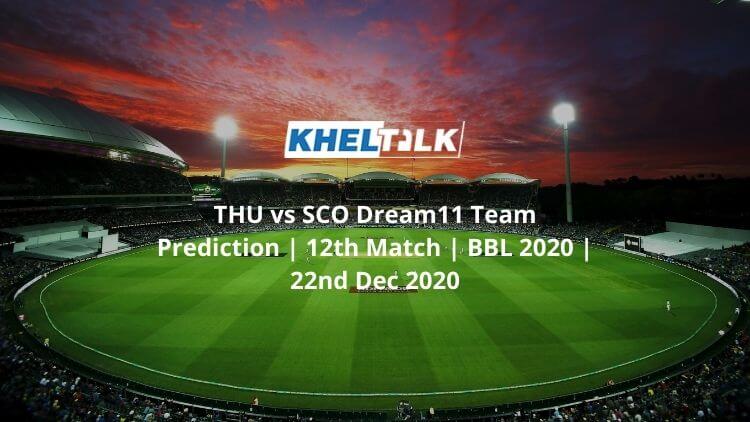 Sydney Thunder will take on Perth Scorchers in the 12th match of the tournament. Both the teams are at the bottom half of the table and since this is just early stages, a win here can take them to the top. Thunder have won one and lost one from their two matches while Scorchers have lost one and one of their matches got washed off due to rain.

Thunder have won their match against Melbourne Stars where they successfully chased 178 runs. They are currently in 6th position. On the other hand, Scorchers went down to Melbourne Renegades as the latter went on to chase 130 with ease. Let’s go through our THU vs SCO Dream11 Team Prediction for the upcoming BBL 2020-21 game.

The pitch will be suitable for the batsmen while the bowlers will enjoy their early spell. The toss will be crucial here as the team batting second will have the upper hand. Also, Manuka Oval is one of the difficult places to field, blame the light. We might get to see a lot of drop catches and misfields here.

Average 1st inns score at this venue in the tournament- 158

The Thunder will have a positive start as they know this venue better. They have played two matches here and in the last match, they went on to chase down 180 with ease. The teenager Tanveer Sangha will be the player to watch out for as he will be going against his mentor Fawad Ahmed here. Also, the team will be depending more on their experienced trio of Callum Ferguson, Usman Khawaja, and Ben Cutting. This our THU vs SCO Dream11 Team Prediction Team News for Sydney Thunders.

While the team might take some time to adapt to the condition of Manuka Oval, they will be hoping that their star players like Colin Munro, Mitchell Marsh comes good in this match. The conditions will suit Fawad Ahmed and he will be leading the bowling attack of the team.

While Usman Khawaja is yet to get into the groove here, he certainly has vast experience and can easily change the course of the game. He has 1404 runs at a strike-rate of 129.64 from 44 T20 matches.

Colin Munro, no doubt, is one of the best players when it comes to the T20s. He scored 49 in his last outing and looked in good touch as well.

Daniel Sams was the star performer for his team in his last outing. He smashed 65* just 25 balls and also had two wickets to his name.

THU vs SCO Dream11 Team Prediction: Who will win the match

Sydney Thunder looks like a more balanced side than the Scorchers and they bat deep too. Scorchers will need something big from their experienced players, especially, Colin Munro to stay in the contest. On the whole, this match will be a high-scoring contest for sure. And, as per our THU vs SCO Dream11 Team Prediction, we expect Sydney Thunder to win the game against Perth Scorchers.