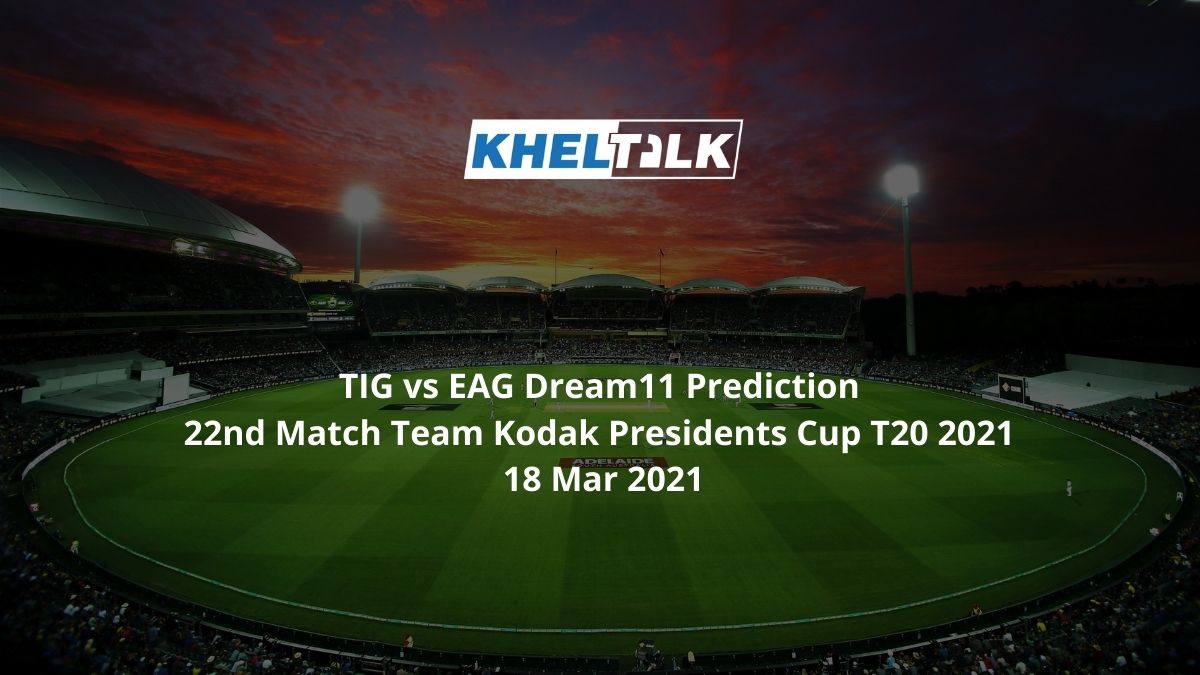 Here are the stats for the teams TIG vs EAG

The surface has been neutral throughout the tournament. We don’t think it will change here as well. We can expect teams to bat first and get to a good total, something around 150. Also, both teams will look to build their line-up with more number of spinners here.

A cloudy day awaits us at Alappuzha on Thursday here. We can expect the Sun to dominate but will be wrapped around clouds, undoubtedly a good climate to bat on.

It is good to go with more number of all-rounders as they can fetch us points from both fronts. Also, wait till the announcement of the toss as there will be a few changes in the line-ups.

All eyes will be on RCB’s new recruit Azharuddeen who is back into the team. He not only will be producing big knocks but is also an excellent keeper.

The team will begin this contest as the favourite because of the presence of in-form players and we can expect them to bat first because of their depth in batting.

Stats from the last match-

With some of the best players from Kerala in the team, Tigers are looking good in the tournament so far. Led by the experienced Sachin Baby, The team has good balance and are one of the best bowling sides here, thanks to the presence of bowlers like Sreesanth.

While they are one of the best teams here, the team is highly inconsistent and will be desperately looking for yet another win in this contest. They will be looking to change the batting order here, something that is not working at the moment.

Here are a few predictions for the captain pick for the TIG vs EAG clash.

M Azharuddeen is back to the side and will be the player to watch out for here. He will be opening the innings for the team and in the first match he had played here, he managed to score a brilliant fifty. He also will be keen to add more points through the keeping as well.

Sachin Baby, the skipper, will be leading the batting attack here. He will be playing in the middle-order and we can expect him to score a good cameo in this contest. Most importantly, he is doing well with the ball as well. In the last match, he had two wickets to his name.

Gireesh PG’s consistency has helped his team to pick up a couple of good scores in this tournament so far. Even in the last match, he did well to score 76 while others struggled. A good performance from him can prove vital in this contest.

Akshay has been one of the leading wicket-takers of the tournament and all eyes will be on him once again. Even in the last match, he was able to grab four wickets and restrict the opponent with ease.

Akhil Scaria has contributed from both fronts and is one of the leading wicket-takers of the tournament at the moment. A couple of early wickets from him will help the team to win this contest.

Rakesh will be opening the bowling for the team and he will be looking for an excellent spell in this contest. He ended up picking three wickets in his last outing and is one of the players to watch out for here.

Here is the Dream 11 Team prediction for TIG vs EAG. We are going with players who are currently in good form and can win the match with ease in our Head To Head & Grand League

Head To Head Team For Tigers vs Eagles

Who Will Win Today Between TIG vs EAG Dream11 Prediction, 22nd match?

According to Kheltalk’s astrology TIG vs EAG Dream11 match Prediction, TIG will win the match.

According to Kheltalk’s TIG vs EAG Dream11 toss prediction, EAG will win the toss and will opt to bat first.