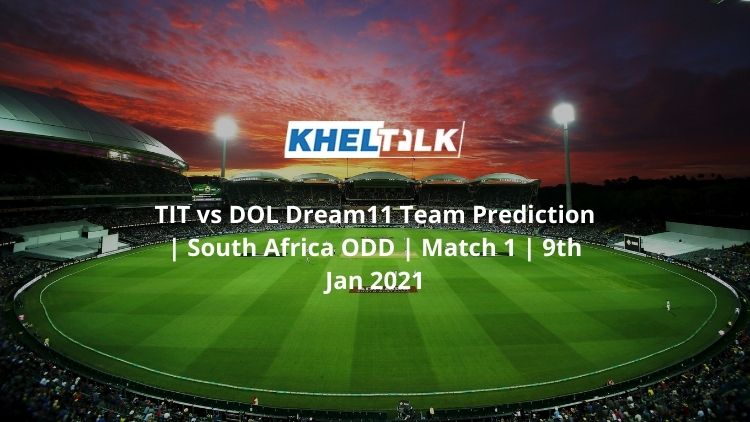 Titans will take on Dolphins in the 1st match of the Momentum One-day cup of South Africa. Every single match here is an important one as the tournament has been reduced to a total of 15 matches from its original 24 matches due to the coronavirus pandemic.

The teams are divided into two groups of three and will play each other twice, with the top two teams from each group competing in the semi-finals. Both Titans and Dolphins will be missing out on a few of the star players and will be hoping for a positive start here. Let’s go through our Dream11 Team Prediction for the upcoming match.

The pitch will support both the batsmen and the bowlers. The initial stages with the new ball with be crucial for the batsmen and once they get past that session, the batting becomes easier. We can expect something around 250 at this venue and the team batting second will have the upper hand here.

Highest score at this venue- 418

Lowest score at this venue- 45

Titans will miss out on some of the star players including Aiden Markram but the team is still one of the strongest in the tournament and are favorites to win the trophy once again. In the previous edition, Zorzi was one of the stand-out performers for Titans and this year, in the absence of Markram, Elgar, he will be having extra responsibility. Farhaan Behardien is yet another player who will begin in the necessary experience to the otherwise young squad.

Though the defending champions Dolphins doesn’t have a lot of international players like Titans, the team is full of raw talent and has the players who are likely to make their debut soon for the national team. Roelofsen is one of them. The Dolphins batsman ended up as the leading run-scorer in the previous edition of the tournament. He had 588 runs from his 10 matches. Apart from Roelofsen, the team will be dependent on Erwee as well. Erwee can contribute both with bat and ball which is an added advantage. However, he will not play this match as he was with the national side which took on Sri Lanka recently.

Roelofsen will be one of the top choices for captain here. The Dolphins wicket-keeper was the leading run-scorer in the previous edition. He had 588 runs with an average close to 66.

Zorzi averaged close to 48 in the previous edition of the tournament. He had 479 runs and had a ton and three fifties to his name.

Phehlukwayo needs no introduction. The South African all-rounder will be keen to start the tournament with a good performance. He so far has 1229 runs from his 98 matches and also has picked up 115 wickets in his List-A career.

Kyle Abbott will be a key player for Titans here. He has 141 wickets from his 104 matches and is also a useful batsman lower down the order.

TIT vs DOL Dream11 Team Prediction: Who will win the match

While both the teams are looking good on papers, Dolphins will begin this contest as the favorites as Titans will be missing out on a few of their big names here. Having said that, Dolphins will miss the services of their captain Maharaj which could prove vital too. The team will be hoping that the bunch of all-rounders who have vast experience comes good here.