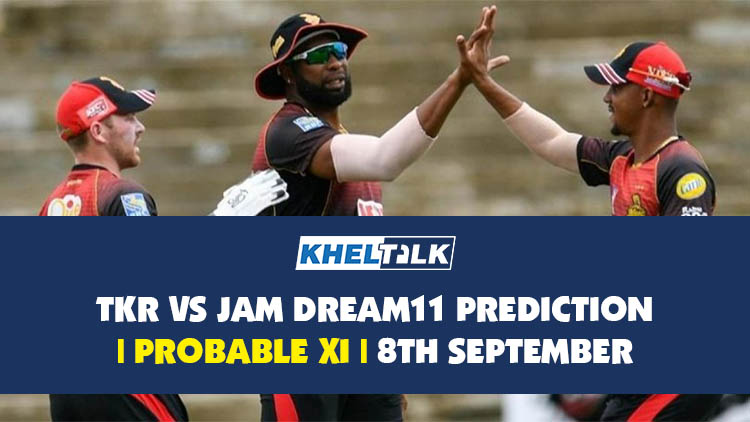 TKR vs JAM, Caribbean Premier League 2020, Dream11 Prediction :
In Hero CPL 2020, the league stage has come down to a halt. And, the semi-final games are all set to begin. Now, the very first semi-final of the exciting T20 tournament will be played between Trinbago Knight Riders and Jamaica Tallawahs. Today, we are here to give a brief analysis of the stats and performance of both the semi-finalists. We have also tried to come up with the TKR vs JAM Dream11 Prediction for our followers.

Trinbago Knight Riders look pretty much unstoppable, who have won 10 games in a row. It is an astonishing record created by any CPL team in the history of the T20 tournament. Darren Bravo is their leading run-scorer with 239 runs in 10 innings. Lendl Simmons has also regained his form with the bat. He has muscled out 218 runs from 9 games.

The aforementioned due always help their side in taking a driving seat during the games. The same trend is expected to be followed in the next game. And the chances are quite high that they will not have a big problem in defeating the out of form side of Jamaica Tallawahs.

Jamaica Tallawahs finished their league stage at fourth position with seven points in 10 games with three wins. They also lost their previous game to St. Lucia Zouks by 11 runs. However, it will be a new game for their star-studded side, who will be eager to take the field in order to outclass their opponent and take one step closer to CPL 2020 trophy.

They will have an eye to avenge the loss of their previous loss against the same opponent in the previous face-off. JAM has the services of players like Andre Russell, Glenn Phillips, Chadwick Walton, Rovman Powell, who will play a vital role in the 1st semi-final against TKR.

Russell is a dynamic hitter, who can change the game in a few overs with his batting. He likes to take the charge against the bowlers from the word go. And, he is expected to come out all guns blazing in the 1st semi-final against TKR. In this edition, he has scored 220 runs and grabbed three wickets from 8 games.

The Jamaica Tallawahs opener has regained his fine form with the bat in Hero CPL 2020. He is making the mockery of the bowlers with ease. So far, he has smacked 314 runs from 10 games at an average of 39.25. He can be picked as the captain or vice-captain in Small league or Grand League based on his convincing form.

The Afghan-spinner is turning the tables for his team with his skillful spin bowling. He is making the stay of the opponent batsman quite difficult at the crease. In this season, he has outperformed his competitors in bowling by taking 15 wickets from 10 games. At the moment, he is the leading wicket-taker of the tournament. This is the reason, we have picked him as one the choice in our captain/vice-captain category.

TKR vs JAM Dream11 Prediction: Who will win the 1st semi-final match

Kheltalk has analyzed every aspect of Trinbago Knight Riders and Jamaica Tallawahs. Now, we have come to the conclusion that TKR looks like the favorites to win the upcoming affair. They have not suffered a single defeat in this tournament. Moreoever, they have defeated Jamaica Tallawahs in the previous face-off with sheer dominance. Meanwhile, the JAM’s journey to the semi-final was full of ups and downs. This is the reason we have picked Trinbago Knight Riders as the favourites to win the 1st semi-final.