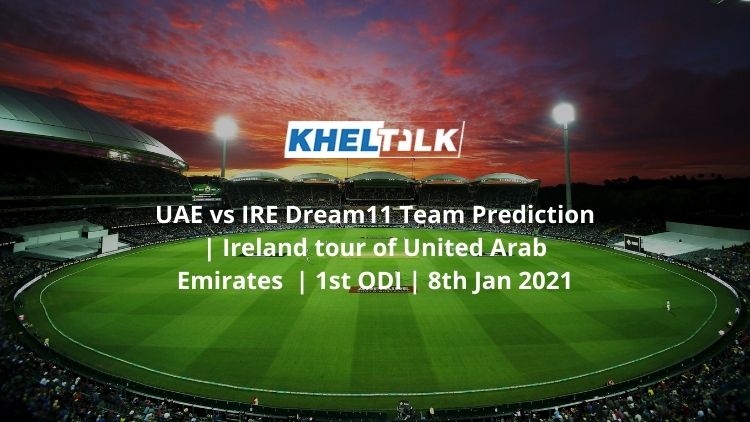 Ireland will take on the United Arab Emirates in the 1st match of their tour. While UAE will be playing their first match after a long time, Ireland recently had a series against England which they went on to lose but ended up winning an ODI.

Both the teams will be locking horns for the first time since 2018. While Ireland looks like a strong team compared to the UAE, we can expect the latter to come up with something special especially because they are playing at home. Also, a lot of players featured in the recently concluded Emirates T20 League and they did well there. Let’s have a look at our Dream11 Team Prediction for the 1st ODI between UAE and Ireland.

Abu Dhabi is known for the slowness in the pitch and the batting is definitely not an easy task here, at least not under the scorching sun. It will be a difficult task for Ireland to grind under the sun, and they will be hoping for a better climate too. The team will be hoping to bat first, majorly to avoid the sun. Also when the climate gets better in the second half, it will be easier for the bowlers.

It’s been more than a year since UAE took the field. Their last game came in 2019 against USA and Scotland. The team went on to lose to the series. However, things are looking bright for the team as most of the players have played and did well in the Emirates D20 League. The all-rounder Rohan Mustafa will be looking to lead the team from the front and he had an excellent outing in the tournament.

Ireland will be missing out on some of the key players here due to injuries while a few were left out in order to give opportunities for youngsters. The wicket-keeper Gary Wilson will not feature here as he is on paternity leave. In a way, this is an important tournament for Ireland as they prepare for important series against Afghanistan which will be part of the World Cup Super League.

Paul Stirling is the popular choice for the captain in this contest. The opener has 4277 runs in ODIs from his 120 matches. He has 9 hundred and 24 fifties to his name.

Gareth Delany can contribute both with bat and ball. He has a list-A average close to 19 and also has picked up 14 wickets from 21 matches.

Andy Balbirnie has vast experience and has 2041 runs from 67 innings. He has 6 tons and 9 fifties to his name.

Aryan Lakra was the star performer in the recently concluded T20 domestic tournament. He had 20 wickets in the tournament and ended up as the 2nd leading wicket-taker.

UAE vs IRE Dream 11 Team Prediction: Who will win the match

As Ireland prepares for their big tournament against Afghanistan, the team will be looking for a positive start here. We might see them rest experienced players and they might go with more youngsters to give them enough match practice. On the other hand, the UAE has some of the players who were just too good in the domestic T20 competition. The team will be hoping that they could continue to perform in a similar way here.