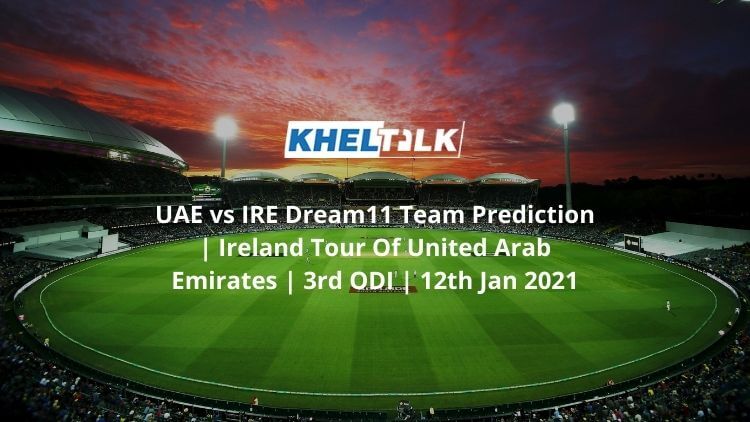 After a jaw-dropping performance in the first match, UAE had an unexpected experience as two of their players had tested positive for the coronavirus. This led to the postponement of the 2nd ODI. Now that the remaining cricketers have tested negative, both the teams will lock horns once again in the 3rd ODI of the series.

This is a must-win game for the visitors as they went down against the hosts in the first match where the latter chased down 269 with ease, thanks to tons from Rizwan and Usman.

On the other hand, Ireland will be looking to bounce back after a forgettable match. Though the team batted well to score 269, they were let down by the bowlers who couldn’t get rid of UAE’s middle-order. Let’s go through our Dream11 Team Prediction for the upcoming affair between UAE and Ireland.

While batting here is a bit difficult than other grounds at UAE, we did see a commendable batting performance from both the teams in the first ODI. We can expect a similar kind of day here as well, and the bowlers will have a hard time surviving not only the batsmen but also the scorching sun.

They played their first match since 2019 and provided a brilliant performance where they went on to win the first ODI of the series. Despite a ton from Stirling, their bowlers came back stronger to produce dots at the right time which added more pressure on Ireland, thereby, they ended up losing wickets. UAE will be hoping for a similar kind of performance here as well but the team will be without two of their main players, Suri and Lakra who had tested positive for coronavirus.

Ireland will be rethinking their decision to miss out on a few key players for the series as the team went down poorly against UAE in their first outing. The team was supposed to win big here but unfortunately, they had no answers to the brilliance from the home team. The bowlers are looking more like a weak link here for the team, something they might look to improve in this contest.

Rizwan provided the platform for the UAE team to win their last outing. Rizwan, who had a decent domestic T20 tournament, came back stronger here to score 109 runs with 9 fours and a six.

Andy Balbirnie has vast experience and added 53 runs from 61 deliveries in the last match. He came in at number three after Kevin O’Brien’s departure and built an excellent partnership with Paul Stirling to take the team to a decent total.

Muhammad Usman played the innings of his life when he took his team home in the first ODI. He had 102* runs from 107 deliveries with seven fours and three sixes. We can expect him to roll his arms for a few quick overs here.

UAE vs IRE Dream 11 Team Prediction: Who will win the match

This is a must-win match for Ireland and the team will be hoping for a better outing here. They will be looking to make a few changes to the line-up and might try to add some weightage to the bowling department that looked feeble in the last match. They will begin this contest as the favorites against the hosts. UAE, on the other hand, certainly will be looking to continue the similar form and the middle-order now will have more responsibility in the absence of Suri.