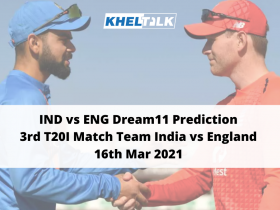 Vienna CC and Bangladesh Austria will come head to head in the next fixture of the tournament. Talking about Vienna CC, they have won three out of seven games so far, and currently, they sit at the 5th spot of the points table.

Meanwhile, Bangladesh Austria had a bitter start in the tournament as they sit at the second last spot at the points table with just two wins in seven games.

Not to forget, these two teams have had two head to head encounter previously in the tournament and Vienna have thrashed Bangladesh Austria in both games.

Here are the stats for the teams VCC vs BAA

The surface at Seebarn has been supportive to both batsmen and bowlers. The average 1st inning score here is 106 runs. The team winning the toss is likely to opt to bat first as 80% of the game have been won batting first. Pacers will have much support as compared with spinners.

The temperature is expected to hover around 13°C on the matchday with 60 % humidity and 8 km/hr wind speed. No chance of rain.

Vienna CC has already beaten them twice in the tournament, so make sure you pick more players for VCC. They have a much-balanced squad when compared with Bangladesh Austria. Go with the combination of 7:4.

Vienna CC is currently playing against Vienna Danube and batting first they have scored 112 runs in given overs. Vienna Danube needs 88 runs in 47 balls at 11.23 rpo with 8 wickets in hand.

Bangladesh Austria played their last game against Cricketer CC and chasing down a massive target of 138 runs, BAA fell short by 23 runs, despite having six wickets in hand. They might come up with few chances for this game.

Mark Simpson Parker has turned out to be an effective all-rounder for the side. In seven games, he has scored 198 runs at an average of 39.60 including five sixes and 17 fours. HE even has nine wickets to his name and this makes him the highest wicket-taker also.

Lakmal Kashuri has also been the most lethal bowler for the side. Even he has chipped nine wickets for Vienna CC but at an impressive economy of 4.88. Not just he chips wickets, but he doesn’t even allow the batsmen to hit in his spell.

Iqbal Hossain is the highest run-getter for Bangladesh Austria with 199 runs in seven innings at a strike rate of 251.89. He even has five wickets to his name at an economy of 11.63. He can be impactful again. Don’t miss him out.

Hassan Ashfaq has been another reliable asset who always turns up when needed. In six innings, he has hammered 140 runs at an average of 23.33 and has even plucked four wickets in his spell.

Who Will Win Today Between VCC vs BAA Dream11 Prediction, 33th Match?

According to Kheltalk’s astrology VCC vs BAA Dream11 match Prediction, the Team VCC will win the match. They have already demolished them twice in the tournament and now they are aware of all their weaknesses. They would play their natural game and won’t let the opposition settle at any point of time.

According to Kheltalk’s VCC vs BAA Dream11 toss prediction, VCC will win the toss and will opt to bat first. As most of the games at this venue have been won batting first.