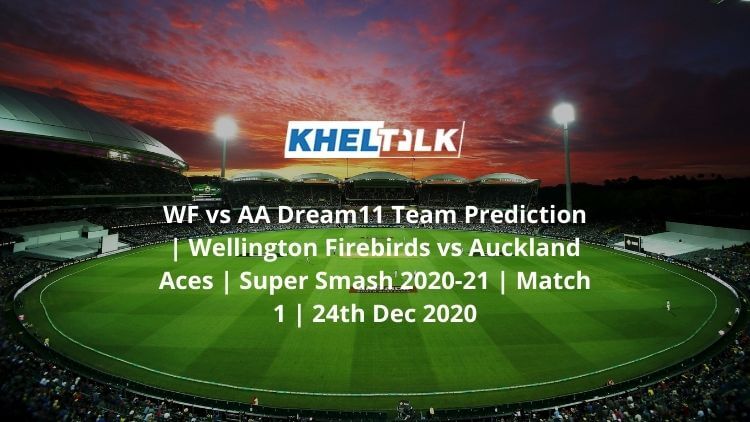 In the first match of Super Smash 2020, Wellington Firebirds will take on Auckland Aces. This is the re-match of the final in the last edition where Wellington went on to defeat Auckland by 22 runs. Last year, Wellington ended at the top spot with 6 wins to their name while Auckland finished 3rd. They went on to defeat Otago in the preliminary finals to reach the final. Both the teams will miss out on a few star players due to national duty and thus, this match will be an interesting contest. Let’s go through our WF vs AA Dream11 Team Prediction for the upcoming match of Super Smash 2020-21.

This will be the 2nd match at the same venue, right after the women’s match, the men’s team will lock horns here. Going by the previous matches, conditions will assist the batsmen more, thanks to short boundaries. Also, the team batting first will have the upper hand.

Total matches played at this venue – 24

Wellington Firebirds will be glad to have Hamish Bennett and Logan van Beek back into the team after injury. A lot depends on Bennett here. On the other hand, the team will be missing out on their best players Devon Conway and Jimmy Neesham because of their national duty. Devon Conway’s absence certainly is a big blow for the team. This our Team News from Wellington for the upcoming WF vs AA Dream11 Fantasy.

Danru Ferns, Ryan Harrison, William O’Donnell, Ollie Pringle are likely to make their debut in this match and a lot depends on them here as the team will be missing out on some of the key players including Martin Guptill due to their involvement in the National team. Also, Lockie Ferguson and Mark Chapman will miss out due to injury. This our Team News from Auckland Aces for the upcoming WF vs AA Dream11 Fantasy.

Michael Bracewell will have additional responsibility in the absence of Devon Conway. Bracewell has 1538 runs from 71 innings with a strike-rate close to 132.

William O’Donnell will be playing his first T20 here. He is in great form and has scored four fifties and a hundred in his last five One-day matches.

Will Somerville is a tricky pick but can be the game-changer here. He has 20 wickets with an economy rate close to 7.50. He also has 104 runs from 7 innings.

Hamish Bennett is back after his injury and will be the main player for his team. He has 52 wickets from his 60 matches with an economy rate lesser than 8.

WF vs AA Team11 Team Prediction: Who will win the match

Since both teams miss many players either due to injury or due to national duty, it is very difficult to pick a winner here. Both the teams look good on the papers. Auckland, however, will begin this contest as the favorites as per our WF vs AA Dream11 Team Prediction for the tournament opener of Super Smash 2020-21.