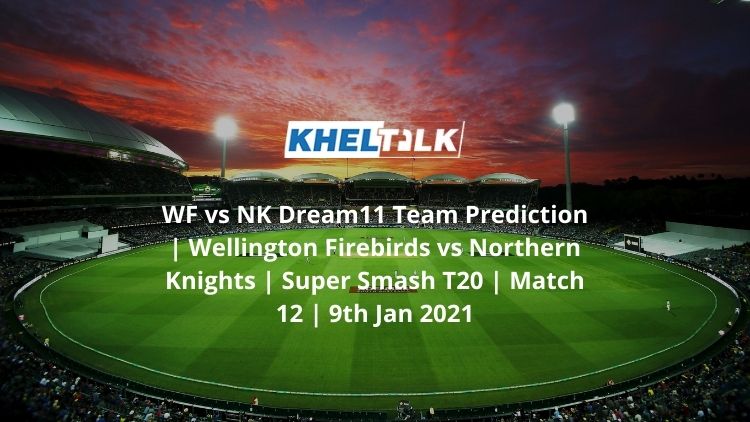 Wellington Firebird will lock horns against Northern Knights in the 12th fixtures of the Dream11 Super Smash competition. Defending champions Firebird have won all three games of this season, while Knights could only manage to win one of their four games in the tournament. The Premier T20 competition is finally getting underway in New Zealand and Northerns will even welcome some of the international players to their side. Let’s go through our Dream11 Team Prediction for the upcoming affair of NK vs WF in Super Smash 2020-21

Pacers will enjoy variations in the initial phase of the game but later on, the momentum will shift towards the batsmen. The average batting score at this venue in T20 Domestic games is 159 runs

Mitchell Santner is likely to replace Brownlie for this game. No other changes are expected. Clarke and Seifert will again open the innings, followed by skipper Devrich and Cooper. Hampton and Scott will be there for the late hitting. Santner is expected to trouble the batsmen with his twist and turns alongside pacers, J Walker and Randell.

No changes are expected from Wellington after an emphatic win against the same opponent. Finn Allen and Rachin Ravindra played outstanding cricket and solely helped their team to win the game for their side. James Neesham will again be expected to do wonders with the ball and keep it hard for Knights to score runs.

Finn Allen is coming into this play after scoring 91 runs off 50 balls including 7 fours and 5 sixes against the same opponent. He looks in tremendous form and cannot be taken lightly.

Not to forget, Anton Devrich smashed a ton against the Central Stags when they met last. He looks in tremendous form and might display the same scenario in the upcoming game as well. Don’t miss him out.

Jeet Raval can be a favorable choice for the vice-captain as he has scored 676 T20 runs at a strike rate of 126.82. Another advantage of having is that he will open the innings in this game.

Jimmy Neesham is one of the best all-rounders the game has ever produced. He has scalped three wickets in the tournament, whereas he is a world-class batsman and is capable of destroying the bowler’s economy.

NK vs WF Team11 Team Prediction: Who will win the match

Wellington Firebirds defeated the same opponent by 9 wickets last time out and will be looking forward to humiliating them again. This time they have the home advantage. Nevertheless, this will be an interesting contest for sure as per our Dream11 Team Prediction for the upcoming game. Our experts bet on Wellington to notch a victory here.