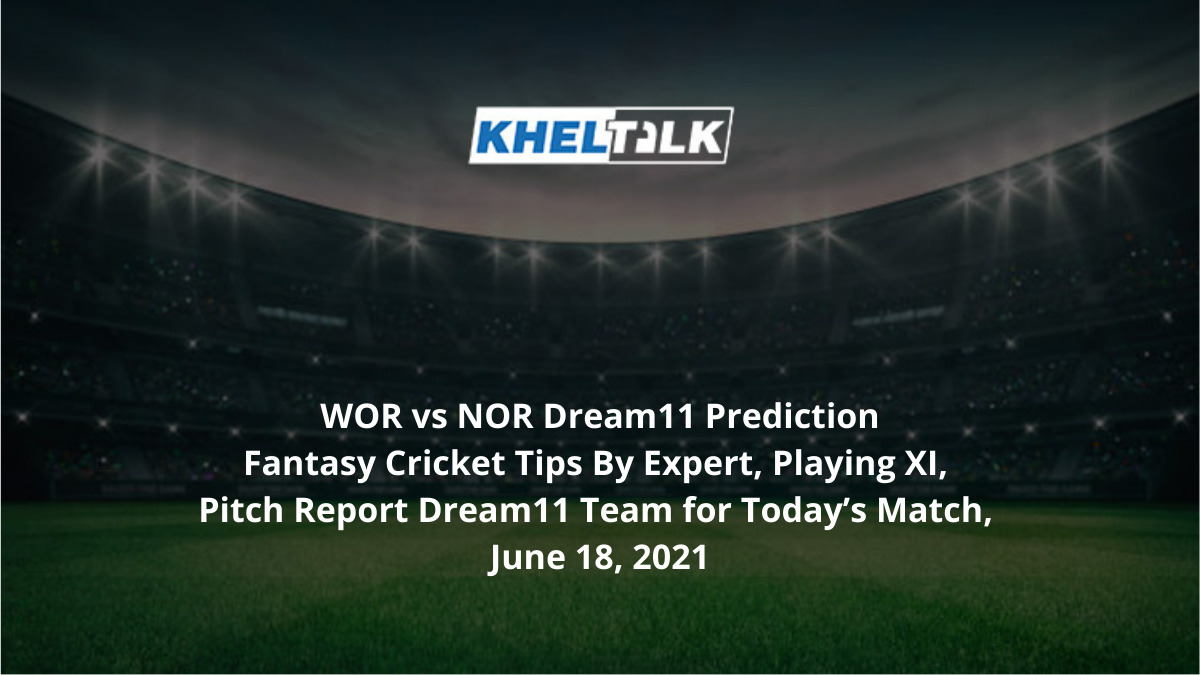 Northamptonshire began their contest with a loss against the same opponent. Undoubtedly, that was one unforgettable night where everything looked good for the team and they had a lot of positives to take from the match.

Cut short to exactly a week later, Northamptonshire went down in all the other matches as well and are currently drowning at the last spot. The two-time champions are in desperate need of a win here.

Worcs, on the other hand, are currently at sixth spot with a couple of wins and a tie to their name. They have a huge chance of jumping a few spots to go to number four in the points table if they can pull off a win here. The team certainly will begin this contest as favourites and have won their previous two meetings convincingly.

WOR vs NOR Dream 11 Match Prediction

This is a good batting track and the teams batting first have done well so far. In this tournament, three matches have been played at this venue and the venue had witness all three possible results. The first match was a tie, the second went to the chasing team and the third went to the batting team. In the last match, Yorkshire made 216 while batting first and one can expect a similar performance here.

Rain is on cards once again at Worcester. The temperature will be around 13 degrees Celcius and there is a 90 per cent chance for rain today. The climate will impact the pitch for sure and there will be dampness in the outfield as it rained overnight as well.

Moeen Ali has been outstanding so far in the tournament and he has the support of Ish Sodhi when it comes to the bowling where the New Zealand spinner had made sure to keep his opponent quiet. When it comes to batting, Oliveira has been a revelation and is likely to continue here as well.

The team is likely to miss Joshua Cobb in this contest. They have already missed out on Mohammad Nabi for a few matches earlier and that is not going well for them at the moment. Ricardo Vasconcelos, who has been their star in county cricket for the past year, has finally begun to score a few runs and will be the trump card today.

Moeen Ali averages close to 27 in the tournament and has scored multiple cameos so far. He is in good touch at the moment and is one of the leading wicket-takers of the side with four wickets to his name with an economy rate of 6.46.

Brett D’Oliveira could prove vital in this contest. The top-order batter has gathered 109 runs so far in this tournament and has picked up a wicket as well. He is likely to roll his arms for a few overs here and with the bat, he has a strike rate of 125.28.

The Australian pacer Ben Dwarshuis could be the difference between two teams today. He has managed to break important partnerships and has six wickets from his four outings so far. Though he is a bit expensive and has given away 8.86 runs per over, he is likely to pick at least a wicket or two here.

Wayne Parnell will be batting at number four today. He was promoted up the order recently and since then he has managed to score good cameos. He so far has 58 runs to his name while striking at 103.57. He so far has picked up four wickets and has a strike rate close to 7.30.

WOR vs NOR- Top Picks by experts

Charles Morris is the leading wicket-taker for Worcestershire at the moment. He has picked up seven wickets and with the best of 2 for 23 and has an economy rate 8.33.

Ricardo Vasconcelos will look to convert his starts to big score in this contest. He has two 30-plus scores in his last two contests. He so far has 87 runs to his name.

Head to Head Dream11 Team Prediction WOR vs NOR

Who Will Win Today Between WOR vs NOR Dream11 Prediction, North Group?

According to Kheltalk’s astrology WOR vs NOR Dream11 match Prediction, Worcestershire won their previous contest with ease and are likely to do it once again here. The team has a better balance compared to their opponent.

WOR vs NOR Toss Prediction today

According to Kheltalk’s WOR vs NOR Dream11 toss prediction, WOR is likely to bowl first at this contest. Though the toss doesn’t make much difference here, the climate will influence both the teams to opt for bowling after winning the toss.