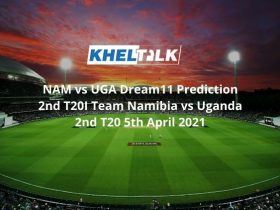 Pakistan would be high on confidence after notching the 1st T20I but will also be a bit worried as Zimbabwe almost came so close to glory but eventually they fell short by 11 runs.

Pakistan has got themselves a strong side and interestingly, this is the best time to test their strength. Meanwhile, Zimbabwe has got some of their senior players but the overall team is a bit weak and they would need several plans for the upcoming game.

In the 1st T20I, batting first, Pakistan posted 149 runs on the scoreboard, and in the response, Zimbabwe fought bravely and nearly got themselves to the victory line but, unfortunately, they fell were restricted for 138 runs.

Top Run-getters in this fixture

Top Wicket-takers in this fixture

Well, talking about the pitch conditions, the surface is very flat and has got nothing for the bowlers but for the batsmen, they need some time to get themselves settle, and then they will be able to score freely. The average inning score at this venue is around 180 if batting first.

Well, no rain predictions have been forecasted in Harare on match day. So we can expect an uninterrupted match. One can expect a cooler climate with 22 degrees Celcius. The pitch tends to get slower in the 2nd innings.

Well, there is no area that suggests that Zimbabwe is going to pull off in this match. Pakistan will surely have an upper hand. Make sure, you prepare your team after the toss and go with the combination of 7:4.

Two influential names – Brendan Taylor and Craig Ervine are back in the squad and their presence really gives the team a sense of relief. These two are the core of the batting order, alongside Sean Williams. Ryan Burl, Regis Chakabva, and Wesley Madhevere will look after the middle-order lineup. Zimbabwe lacks skills and talents in their bowling department when compared with lethal Pakistan’s pace attack. Their main motive would be to stop runs and help their team level the series.

This Pakistani squad has recently defeated South Africa 3-1 and will again look forward to dominating Zimbabwe as well. Their top-order has been consistent with the bat. M Rizwan hammered 82 runs in the 1st T20I and has a fantastic amount of consistency in the T20 format. Having Fakhar Zaman at number 3, Mohammad Hafeez at 4, and Haider Ali at 5, Pakistan has already won the game. The bowling department needs no introduction and is world-class and just in another league when compared to Zimbabwe.

Mohammad Rizwan has been in splendid for in this format and no bowlers have been able to find that particular delivery which he struggles on. He scored 82 runs off 61 balls at a strike rate of 134.43 and if Zimbabwe fails to chip his wicket, then they be ready to face their second defeat in the series. In last nine games, he has scored 515 runs at an average of 103.

Babar Azam is the most valuable player in the side and when these two sides met last in 2020, Azam hammered 133 runs in two innings. However, Babar gave his wicket early in the first game but we all know what he is capable of. He is coming after smashing fifty and a ton against South Africa in T20Is recently.

Blessing Muzarabani is the only Zimbabwe bowler who can touble the Pakistanis. He hasn’t let his team down in last few months and didn’t even allow any Pakistan batsmen to score runs off hi bat. He sent Babar Azam in his very first over. In his overall spell, he conceded 22 runs and bowled 10 dots as well.

Usman Qadir was exceptional with the ball in the 1st T20. Bowling four overs, he chipped three important wickets at a decent economy of 7.25. Overall, he has played 9 T20I and has bagged 17 wickets at an economy of 7.15.

Craig Ervine scored 34 runs off 23 balls in the first game but failed to help his team win the game. Ervine is in exceptional form and has scored 120*, 51, 65 in his last three T20 matches while playing for Tuskers. You cannot afford to miss him.

Head To Head Team For Zimbabwe vs Pakistan

Who Will Win Today Between ZIM vs PAK Dream11 Prediction, 1st T20I?

According to Kheltalk’s astrology ZIM vs PAK Dream11 match Prediction, PAK will win the match. Although, Zimbabwe came so close to victory in the previous game but Pakistan will be favorites to win this contest again. In-form top order and lethal bowling lineup will surely hand over this second victory to Pakistan.

According to Kheltalk’s ZIM vs PAK Dream11 toss prediction, Pakistan will win the toss and opt to bat first at this venue as they would be pretty sure that thier bowling line up would defend any score against Zimbabwe.