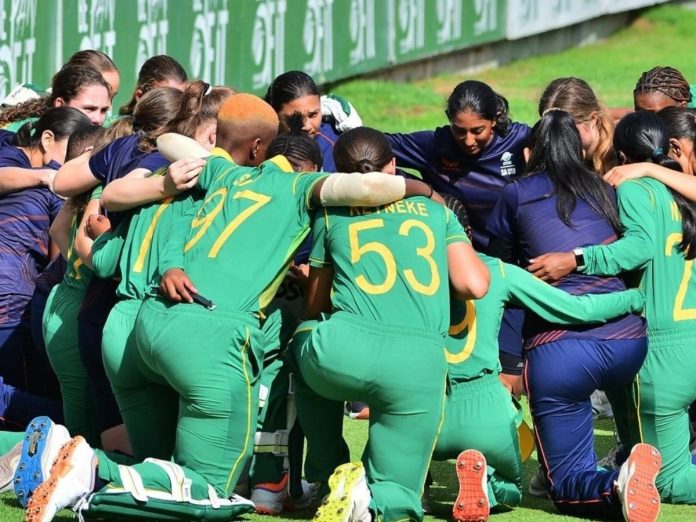 India women will look to dominate once again as they take on South Africa U19 team for the 4th game. Since two games got washed away because of rain, both boards have decided to add another game to the series.

India has already taken a 3-0 lead in the series and will use this game to check out their bench strength. So far the team has managed to give opportunities to everyone and we might see a similar pattern here as well.

South Africa, on the other hand, has struggled to come up with a team that can challenge the Indian team. Only the spinner Seshnie Naidu has troubled the Indian team so far.

This is a good track for spin bowling and the batsmen have struggled to get past 120 in recent matches. This could be yet another low-scoring game. The Indian team is the favorite to win this anyway.

The weather is likely to be cloudy and there is a good chance of rain according to the forecast. The temperature will be around 17 degrees Celsius and is expected to go down as the game goes on.

Soumya Tiwari is one of the leading run-scorer for India in this series. The youngster has scored 200 runs in her last seven matches with a strike rate close to 104. She is also capable of bowling a few overs here,

Shweta Sehrawat led the team in the absence of Shafali Verma in the last game. Shweta has managed to score at least 20-plus in all her games so far. She has 140 runs in her last eight matches.

Mannat Kashyap has been a successful bowler for India. The spinner has picked up 11 wickets in her six matches with an economy rate lesser than four. Mannat is also handy with the bat.

Hurley Gala is likely to produce breakthroughs early in the innings. The pacer has picked up nine wickets in her last seven matches with an economy rate of 4.76. She is one of the attacking players available today.

Seshnie Naidu has been impressive with her spin bowling right from the first. The South African spinner can contribute with the bat too and is one of the players to watch out for here.

According to Kheltalk’s astrology SA-W-U19 vs IN-W-U19 Dream11 match Prediction, India U19 will begin this game as a favorite. They are too good at the moment and are likely to continue their winning run in this game as well. They have already taken a 3-0 lead in the series.

According to Kheltalk’s SA-W-U19 vs IN-W-U19 Dream11 toss prediction, India U19 will win the toss and will bowl first. Both teams will be keen to bowl first at this venue as the pitch will assist the spinners more.