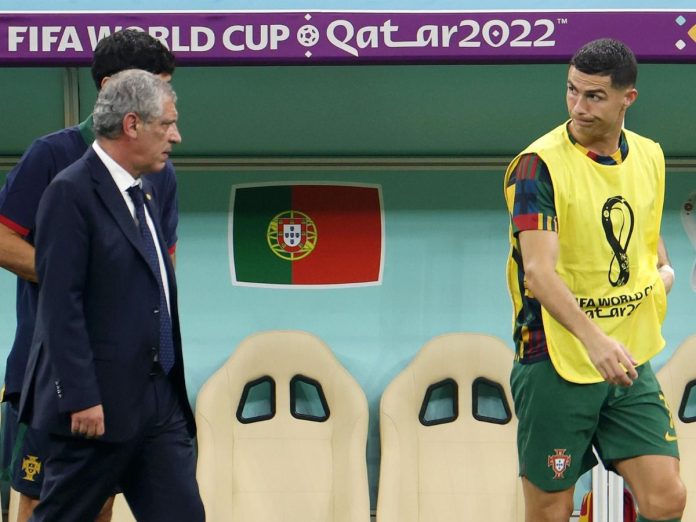 One of the biggest sporting superstars of contemporary times, Cristiano Ronaldo was benched during Portugal’s Round of 16 games against Switzerland. The head coach of Portugal Fernando Santos decided to make the young 21-year-old Goncalo Ramos play. He reposed the faith put in him as he scored a hat-trick.

Portugal’s football team won the game 6-1 and stormed into the quarter-finals, where they are slotted in with the underdog’s Morocco football team. Morocco defied all odds and qualified for their maiden quarter-finals in the FIFA World Cup 2022 after beating Spain in penalties (3-0). Now, the big question is whether Cristiano Ronaldo will be playing in that game on 10th December 2022.

With the hot form of Goncalo Ramos, it seems that Cristiano Ronaldo will be warming the benches on Saturday. The talismanic striker has scored only 1 goal in the FIFA World Cup 2022 in Qatar. He has not been at his usual best.

He also was dissatisfied with coach Santos’ decision of bringing him out of the game against South Korea in the second half. Portugal won that game. Cristiano Ronaldo was reportedly swearing at the coach for substituting him and making him come back to the benches in the second half.

Coach Fernando Santos had said that he did not like his reaction to Ronaldo during the South Korea game.

“Have I already watched the footage? Yes. I didn’t like it. I didn’t like it at all. From there, it’s things you sort out internally, it was sorted out this way, and now we think about the game tomorrow. Everyone is focused on the game,” said Santos.

However, after the win against Switzerland, Fernando Santos said that the decision to make Goncalo Ramos start ahead of Cristiano Ronaldo was purely ‘tactical’.

The 37-year-old striker recently left Manchester United after mutual consent. This came after his fiery interview with famous broadcaster Piers Morgan. He had lashed out at Manchester United manager Erik Ten Hag and also spoke about the problems at Old Trafford.

He is now a free agent and will be looking for a club. There are however reports floating that he will be joining the Saudi Arabia club Al-Nassr. He will be given a whopping fee of 200 million euros, as per reports.