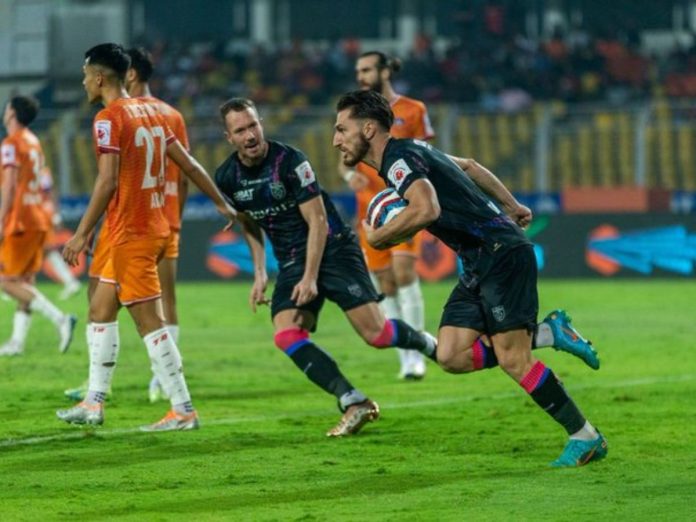 FC Goa registered a clinical victory over Kerala Blasters FC in the ongoing Indian Super League (ISL) 2022-23. They have brought stability into their campaign with this win and are 1 point clear of Odisha FC in the points table with a game played more.

As the business end of the tournament is approaching, every game becomes very important. Iker Guarrotxena, Noah Sadaoui, and Redeem Tlang netted the goals for FC Goa. On the other hand, Dimitrios Diamantakos scored the goal for Kerala Blasters FC. He is Ivan Vukomanovic’s side’s highest goal-scorer in ISL 2022-23.

Brandon Fernandes after getting in contact with Kerala Blasters FC’s Saurav Mandal got a penalty in the 35th minute. Iker Guarrotxena made no mistake and found the back of the net, to give the home side the lead.

Moments before the half-time mark, winger Noah Sadaoui netted the 2nd goal for FC Goa. After a few barren spells, Sadaoui finally found his name on the goal-scoring sheet and Carlos Pena would be extremely elated with his star midfielder.

Kerala Blasters FC’s highest goal-scorer Dimitrios Diamantakos scored the solitary goal for the side in the 51st minute of the game. After a lovely free kick from the left flank by Adrian Luna found Dimitrios near the goal, the Greek footballer made no mistake ins slowly nudging the ball toward the back of the net.

There was a lot of purpose and intent in the Kerala Blasters FC team post the break but FC Goa was a better side, yesterday. Tlang who came off the bench scored the 3rd goal for Kerala Blasters FC in this game. He scored the goal came rushing into the penalty box from the right flank and outwitted Kerala’s goalkeeper, Prabhsukhan Singh Gill.

FC Goa will be hosting East Bengal FC in their next game at the Fatorda Stadium. The match will be taking place on 26th January 2023. Kerala Blasters FC has now lost two games on the trot. They suffered a humiliating 0-4 loss at the hands of table-toppers Mumbai City FC in their previous game. The Yellow Tuskers will be locking horns with NorthEast United FC on 29th January 2023.