MI Vs KKR Head To Head Records in IPL History 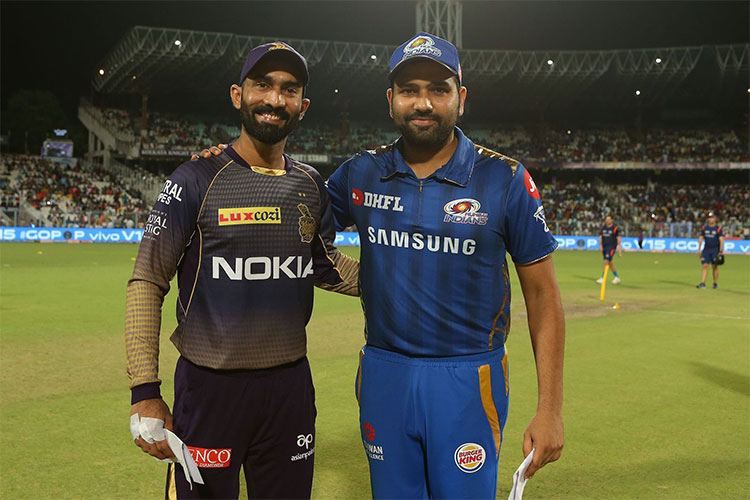 In this article, we are going to share MI Vs KKR Head To Head Records from IPL 2008 till IPL 2019, which includes the number of matches played, match date, match venue details, etc. in the IPL tournament.

Mumbai Indians and Kolkata Knight Riders are two of the biggest franchises in the Indian Premier League. The two teams made their IPL debut in season 1 and have been competing ever since.

They have met a total of 25 times in IPL. Mumbai Indians have enjoyed a good run of victories against KKR. At present, the head to head tally between the two stands at 19-6 in favor of Mumbai Indians.

KKR has a really terrible record against MI. They’ve won less than 25% of the games against MI. Here is a season-wise summary of the head to head records between four-time winners Mumbai Indians and two-times winner Kolkata Knight Riders.

During the first edition of IPL, Mumbai Indians played twice versus KKR. The Mumbai side won both the league games, one at the home stadium and one away in Kolkata. They beat KKR by 7 wickets in their first-ever IPL meeting and by 8 wickets in the reverse fixture.

In the second season of IPL, the two teams met in the league stage. They played two games on a round-robin basis. Mumbai Indians emerged as winners in both games taking their head to head tally versus KKR at 4-0. They won the first game by a huge difference of 92 runs and the other game by 9 runs.

The Kolkata side was finally able to beat Mumbai Indians during IPL 2010. On April 19, KKR beat MI at Eden Gardens by 9 wickets. They lost their first league fixture against Mumbai already on March 22 2010. Head to head records so far, MI (5) – (1) KKR.

Mumbai vs Kolkata Head to Head in IPL 2011

The two teams met again twice during the 5th edition of the Indian Premier League. Both games were played in League stages. MI recorded an important away victory beating KKR at Eden Gardens on May 22. Three days later, MI hosted KKR at Wankhede Stadium and won the game by 4 wickets.

Kolkata vs Mumbai Head to Head in IPL 2012

MI and KKR faced off twice during the league stages of IPL 2012. Both the teams lost at their home stadiums. MI beat KKR at Eden Gardens, Kolkata on May 12. The reverse fixture was played on May 16 at Wankhede Stadium, Mumbai where KKR emerged winners. Kolkata Knight Riders went on to win the IPL trophy that season.

Again, the two giants locked horns on two occasions. Both fixtures were the customary round-robin league ties. The first meeting was at Eden Gardens on April 24 when MI won the game by 5 wickets. The reverse fixture was played at Wankhede Stadium on May 7. Mumbai Indians won the game by 65 runs to shift the head to head tally in their favor by 10-2.

Indians vs Knight Riders Head to Head in IPL 2014

KKR made a strong comeback against MI in the IPL 2014 by winning both the fixtures. The first game was played on April 16 when KKR beat the Mumbai side by 41 runs. The reverse fixture was played on May 14. KKR won the game by 6 wickets.

Knight Riders vs Indians Head to Head in IPL 2015

During this season, the two teams met on two occasions. Both games were played in the league stage. Mumbai Indians and KKR both won a game each at their home stadium. On April 18, KKR beat MI at Eden Garden by 2 runs in a nail-biting fashion. Mumbai Indians hosted KKR at Wankhede Stadium on May 14 and won the game.

During the 9th edition of IPL, Mumbai Indians came back to haunt the Kolkata side twice. MI won both the games home and away. They won at Eden Garden on April 13. The Mumbai side won at the home stadium on April 28.

KKR and MI met thrice during IPL 2017, two of these games came in the league stages while the third game was a qualifier. Mumbai Indians continued to dominate Kolkata Knight Riders as they won all three games. The Mumbai side won at Wankhede Stadium on April 10, at Eden Garden on May 14. They played the third game in Bengaluru on May 20 when MI beat KKR by 6 wickets.

The two teams met only twice in league stages of IPL 2018. Mumbai Indians won both the games. They won at home on May 6 and away at Eden Gardens on May 10. At the end of the season, MI has won a total of 18 games against KKR.

Recently, the two teams met twice during the 12th season of the Indian Premier League. They both won a game each at their home stadiums. KKR beat MI by 34 runs on April 29 2019. Mumbai Indians won the reverse fixture on May 6 by 9 wickets. As of now, the two teams have played 26 games against each other. Mumbai Indians have won 19 of those games compared to KKR’s 6.