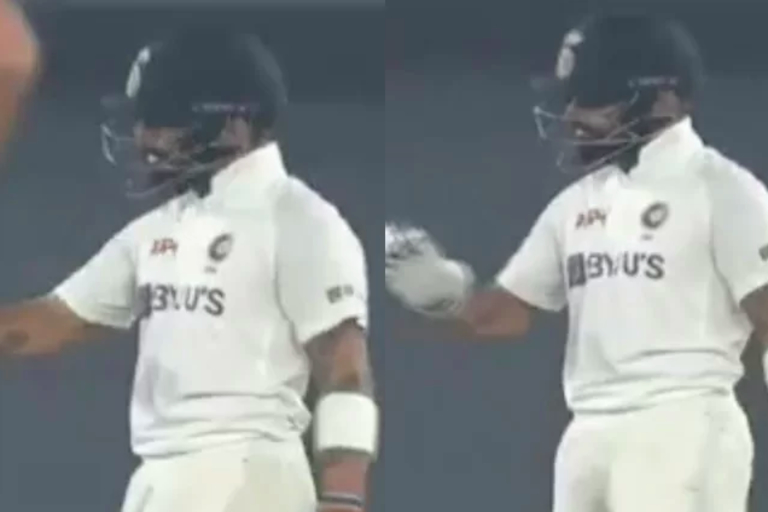 India is currently involved in the historic pink-ball Test with England. This is the first-ever game being played at the Narendra Modi Stadium in Ahmedabad. It is reckoned as the biggest cricket stadium in the world. And, on Day-1 of the game, a spectator breached the ground security in order to meet Virat Kohli. The way the Indian skipper reacted to that instance left everyone in awe.

India lost the toss of the third Test and got the chance to field first. England thought that they have an edge over the hosts as the track looked like it will favor batters. But that was not the case. Indian bowlers came all-guns-blazing and dismissed England at a low score of 112 runs in the first innings. Ishant Sharma opened the account of the wicket as he dismissed English opener, Dominic Sibley.

Indian bowlers dominated throughout the day with the pink cherry in their hands. The fast-bowlers were able to swing the ball in both directions. Meanwhile, the spinners were getting enough turn from the wicket. The England batters were not ready for the same and kneeled down in front of the Indian spinner.

Later on, England bowlers also gave a decent performance with Indian batsmen struggling to score every single run. Rohit Sharma managed a decent fifty with the bat followed a vital 27 run knock coming Virat Kohli’s bat. At the moment Team India is on 99 runs for a loss of 9 wickets. Let’s see if hosts can take a mammoth lead over visitors or not.

Meanwhile, an instance happened on Day-1 that hogged the spotlight for the day and it has nothing to do with the player’s performance. While Kohli and Rohit were batting, an unknown fan breached on-field security in order to meet Virat Kohli.

At the same time, the Indian skipper took a couple of steps back to avoid any kind of contact with the fan. But, he also gave a cheeky smile to his fan.

Post toss in 3rd Test, Virat Kohli said that if they would have won the toss then they would have also picked batting first in the game. However, it turned out to be a blessing for Team India as the pitch reacted totally opposite to what everyone had expected.

“We would have batted first as well. We would look to get into the game early on. The practice wickets have been quite spicy. Something that we have enjoyed as a team. It is such an exciting atmosphere here at the largest cricket stadium.

“I am a bit worried about the lights. We have played in a similar stadium in Dubai. You need to adapt pretty quickly,” Virat was quoted as saying at the toss time before the match. In India’s first innings, Virat managed 27 off 58 with three fours before Jack Leach rattled his woodwork.