Contents
CSK Buys Moeen Ali In A Million Dollar Deal In IPL 2021 Auction
Here Is The Post:
Moeen Ali heroics earn him big bucks at the Auction table, Chennai super kings bags him eventually after fighting with Kings X1 Punjab. Moeen Ali receives a 7 crore Bid from the Chennai camp. The super kings have only one overseas slot to fill, as they leave Glenn Maxwell bid in the middle and pass to Royal challenger Bangalore at 14.25 crore.  Moeen Ali can provide the stability to the struggling Chennai super kings, as he is the all-rounder of what CSK will be looking for in the upcoming season.
He bats in the middle overs and rolls his arms in the middle overs as well. The England spin all-rounder deserves the bid, as he always looks to give everything in the field. He also has a fair amount of experience playing in India. He will have a lot of support behind the stumps in the name of MS Dhoni. The Chennai super kings will be delighted with the inclusion of Moeen Ali.

Moeen Ali has earlier played for Royal Challengers Bangalore in the previous editions. But, he was released by the Bangalore-based franchise due to the low scores and below-average performances in his debut edition. However, looking forward to the current trends, it was expected that the teams will go all-guns-blazing for the all-rounders. This is the reason why spinning all-rounder from England manages to grab a million-dollar deal.
Chennai Super Kings, who is reckoned to show interest in spinners, once again hogged the spotlight and turned things around. They got into a bidding war with Punjab Kings. But, ended up winning at a price of INR 7 Crores. 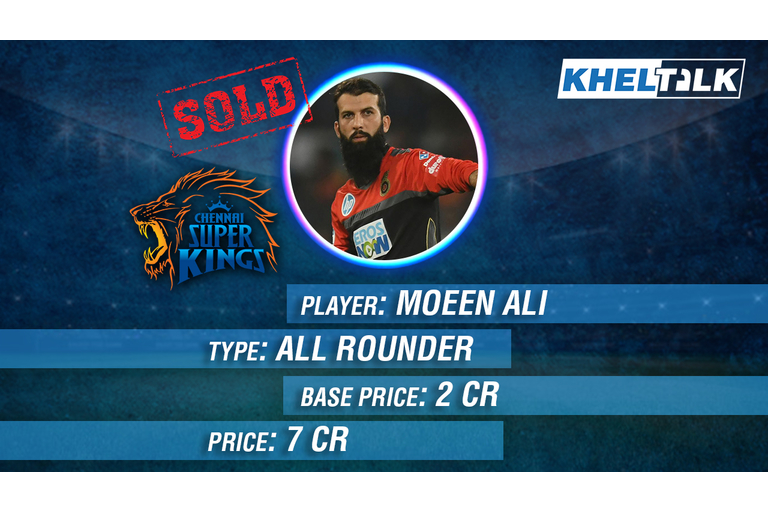