Contents
Jhye Richardson Becomes Million Dollar Baby, Gets Reward For Exceptional Performance In BBL 2020-21
Kings X1 Punjab makes another wise selection, as they bag the in-form bowler from Australia after the fight with Royal challenger Banglore. Jhye Richardson bag with 14 crores by new Punjab kings. The bowlers are in demand, as the franchisees ready to pay bucks for quality bowlers. The Australian paceman Jhye Richardson’s ability gained the interest of franchisees. The new millionaire will make a debut for Punjab Kings in the upcoming season.
Punjab King’s release Sheldon Cottrell and Hardus Viljoen from the squad and now they bag Jhye Richardson a fitting replacement for Punjab. Perth scorchers dynamite pace bowler Jhye Richardson, the highest wicket-taker in the recently concluded season of BBL. He takes 29 wickets and helps Perth scorchers to reach the final.

The Western Australian has phenomenal T-20 numbers, as he played 62 T-20 games and taken 78 wickets with a great average of 22.85. In the last season of the IPL Punjab struggled with the bowling lineup, as they failed to defend the targets. The Punjab franchisees look to strengthen the bowling, as bowlers help you to win the tournament rather than the batsman.
A good bowling side will survive for long rather than a batting side, as they also have a great amount of money in the wallet. Jhye Richardson’s pace in the first couple of overs and variation at the back end of the inning is phenomenal. He carried the burden of Perth scorchers Bowling line up on its own.
He was also named in the Australian squad for the five-match T-20 series in New Zealand courtesy of brilliance in the BBL. Now Jhye Richardson will look to partner with Chris Jordan to make the core stronger of Punjab’s bowling lineup.
Jhye Richardson can also bat, as he has the skills to hit boundaries at the back end of the inning. In 62 T-20 games, he scored 241 runs with a phenomenal strike rate of 137.71. Richardson was never part of the IPL before and now he becomes a millionaire and ready for the debut. That’s the beauty of Auction, as it can make you a star and millionaire overnight.
The Australian Paceman is only 24 years old, but he has a great cricketing brain. He looks mature from the outset and can dismantle the opposition on a day. He suffered an injury at the initial stages of the career, but now he is ready to serve for Punjab in the elite leagues of cricket.
He is also an outstanding fielder which is great for Punjab, as he gives 100% in the field. He considers himself as an all-rounder which adds a plus point. 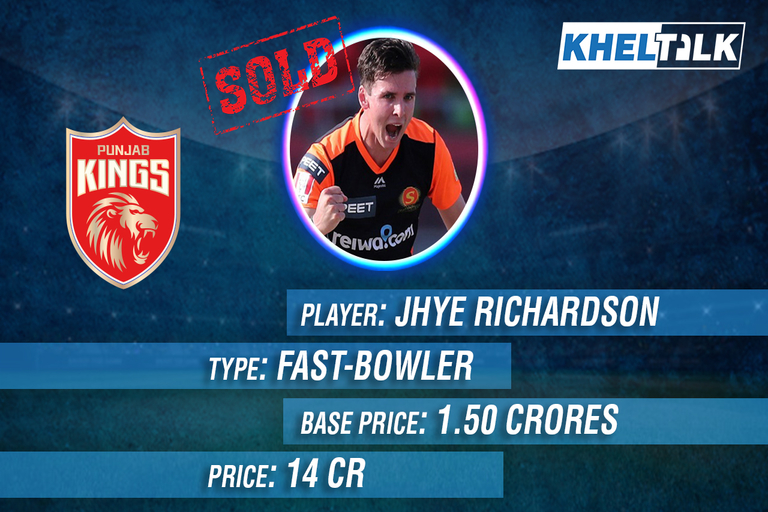