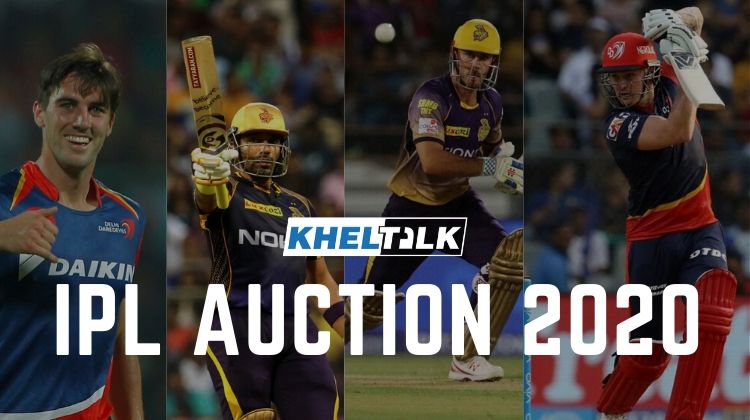 the IPL auction for players takes place in Kolkata on 19th December. Many of the franchises have already released quite a few players, and the IPL auction is set to see 70+ players being drafted into different squads.

A total of 337 players are set to go under the hammer as the list of players for this year’s auction has gone up. 186 Indian players, 143 foreigners and 3 from Associate Nations would be up for grabs on the day of the auction. A maximum of 73 spots is to be filed from a lot available on the day.

What is the balance of the teams ahead of the IPL Auction ?

Teams such as Mumbai Indians (MI), Chennai Super Kings (CSK) and Sunrisers Hyderabad (SRH) have not released much of their players. Also, they don’t have much left in their purse to spend on! They already have an almost balanced side and may look to sign a few backup players.

Delhi Capitals (DC) has been seeing a lot of activities in the trading window with a solid Indian players’ balance in place. Nonetheless, they look thin if we talk about overseas players and should be looking to bring in a few quality cricketers to fill gaps.

On the other hand, Royal Challengers Bangalore (RCB), Rajasthan Royals (RR), Kolkata Knight Riders (KKR) and Kings XI Punjab (KXIP) have released players in bulk. Hence, these franchises should be the busiest teams in the IPL auction.

Who are the players with the highest base price?

Out of 337 players that will go under the hammer, 7 of them carry a maximum base price of Rs.2 crore. On the other hand, other star players have a base price of Rs.1.5 crore, Rs.1 crore and Rs.50 lakh respectively.

Out of the 7 players carrying the highest base price, 5 of them hail from Australia, while the remaining two in the list are Dale Steyn (South Africa) and Angelo Mathews (Sri Lanka).

Chris Woakes, David Willey, Jason Roy and Eoin Morgan – the 4 England players go into the auction in the Rs.1.5 crore price category. Robin Uthappa, the veteran middle-order batsman, who was let go by KKR surprisingly, will be available at a price of Rs.1.5 crore.

Who are among the hot picks?

If you go by the Team combination of most of the franchises ahead of the IPL auction, you may come to notice that foreigner fast bowlers could be in huge demand.

Pat Cummins (Rs.2 crore) is one of the best and his prowess to tonk the ball could also be at the center stage of many teams to pick up.

Left-arm seamers have always been attracting bidders for many seasons. And Sheldon Cottrell (Rs.50 lakh) should be on his way to signing the contract – on the back of a spending performance against India.

Indian seam bowling based all-rounders are also that you don’t get to see often, while foreigners with bowling and batting contribution have always featured in teams. Hence, the likes of Sam Curran (Rs.1 crore), Jimmy Neesham (Rs.50 lakh), Chris Morris (Rs.1.5 crore) and Marcus Stoinis (Rs.1 crore) should also be bidder’s favourites.

Most of these discussed players were let go by the respective franchises, and there would be no surprises if they are re-inducted by them at a lower base price.

Teams are also on the lookout for overseas explosive batting talents and this year will be no exceptions. Evin Lewis (Rs.1 crore), Jason Roy (Rs.1.5 crore), Chris Lynn (Rs.2 crore) and Aaron Finch (Rs.1 crore) should trigger a bidding war among teams.

Among Indian stars sure to feature in this IPL auction, Jaydev Unadkat (Rs.1 crore) and Robin Uthappa (Rs.1.5 crore) are the two big names who can add great value to any Team combination in IPL 2020.

What about dark horses in this IPL Auction?

Going by the history of IPL auctions, there have been instances of lesser-known players earning big bucks because of their impressive domestic performances.

The IPL auction should also be no different! Indian Under19 players such as Priyam Garg and Yashaswi Jaiswal may find a few bidders.

On the other hand, the likes of R Sai Kishore and Virat Singh, who played so well in Syed Mushtaq Ali Trophy, may also trigger a bidding war among teams.

England’s Tom Bonton may also up the excitement level for franchises owing to his destructive batting at the top of the order.

The best names in the game of Cricket from domestic as well as overseas get their best chances to be signed by franchises and play alongside the games’ greats!

“YatraPratibhaAvsaraPrapnotihi” – these four Sanskrit words engraved in the middle of the IPL Trophy describes the spirit of IPL better than anything else. Ever since its inception, Indian Premier League has a reputation of assisting rising players in building a successful career.

IPL not only revolutionizes a cricketer’s life with colossal money but even provides them with a globally reputed podium to showcase skills. In turn, if they are successful, it also helps them get into their respective countries’ National Teams.

Recent performances also play a key role for cricketers that are expecting to seize IPL contracts. For Indian players, their performances in domestic championships such as Syed Mushtaq Ali and Vijay Hazare are the parameters for selection in franchises.

Let’s have a look at 5 uncapped players who have been in great nicks in domestic Cricket and may start a bidding competition among teams in IPL auction.

Yashaswi Jaiswal is only 17 years old but has been in great form with the bat in the Vijay Hazare Trophy. It was good to get him a call in the Indian Team in the 50-overs Under19 World Cup. He emerged as the youngest player to hit a double century in List-A Cricket. Overall, he has 564 runs at an average of 112.80 that is studded with 3 100s and 1 fifty. The ‘wonder kid’ had to face a lot during his earlier days, and his determination to fight against all the odds to become successful makes him ‘special.’

R Sai Kishore hails from Tamil Nadu, and he had a dream Syed Mushtaq Ali season as he went on to claim 20 scalps at an economy of 4.63.

He made many heads turn by taking Tamil Nadu to the Final of the tournament, where they were defeated by Karnataka by a whisker. He had expected to be picked by an IPL Team in 2018, but could not secure a position. However, the snub motivated him to work hard on his game, including batting. He has a base price of Rs.20 lakh and should be able to fetch many takers owing to his fine performance during the PowerPlay.

Virat Singh was among key players in the just completed Syed Mushtaq Ali Trophy. He went on to amass 343 runs at an average of 57.17 in 10 outings. He also clicked with the bat and scored 335 runs at a strike rate of 100 in the Vijay Hazare Trophy.

The Deodhar Trophy also saw the young lad playing a vital inning of 76 while batting alongside Axar Patel for India C Vs India B. He was not only the highest run-getter for Jharkhand in the T20 Championship, but even one of the frontrunners to lead India U19 Team in the build-up to the World Cup.

At the IPL auction in Kolkata, he could be one of the talents that franchises would surely be looking at.

Rohan Kadam, Karnataka’s 25-year player, was the highest run-scorer in the Syed Mushtaq Ali Trophy. He had a great season with the bat as he scored 536 runs in 12 matches at a strike rate of 129.78. The performance paved the way for his Team’s second successive title. The Team had the likes of players such as the Skipper Manish Pandey, Mayank Agarwal and Devdutt Padikkal, but Kadam was the standout player. Rohan Kadam is an amazing T20 player as he has the ability to play an anchor role as well as going boom-boom in no time. He was called by Mumbai Indians for trails, but he could not make up as the date clashed with the Vijay Hazare Trophy knockouts. He had to bear the brunt last season when Syed Mushtaq Ali Trophy was held after the IPL auction because of no scout or selector watching his batting. But with his fantastic form helping him being observed from all corners this time, he could break big into IPL auctions on 19th December.

Priyam Garg is an Uttar Pradesh batsman who was named as the Captain of the 15-Member Team that will go to South Africa. He has been able to rise from the ranks and collected 814 runs in 10 games of Vijay Hazare Trophy in 2018-19.

IPL franchises are always on the lookout for such impressive records of a player while putting their money with future in consideration. Thus, Priyam Garg may attract bids in the forthcoming IPL auction.

You can watch the 2020 IPL Auction live on Star Sports Network.