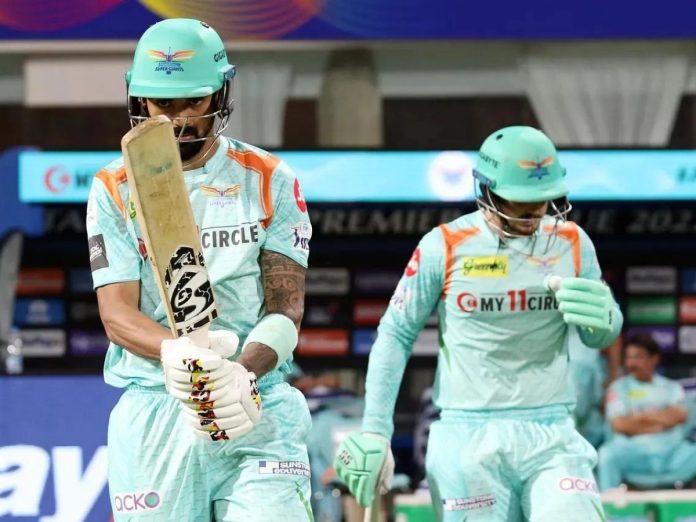 Lucknow Super Giant’s South African player Quinton de Kock and KL Rahul went to town with the willow gathering the highest opening partnership in the history of the Indian Premium League (IPL). This feat occurred during the LSG v Kolkata Knight Riders on Wednesday. The duo batted for full 20 overs and went all guns blazing against the KKR bowlers. De Kock’s 140 in 70 balls and Rahul’s 68 in 51 balls assisted LSG to pin a total of 210 at the scoreboard.

Highest partnerships for any wicket in IPL

Coach to KL Rahul and Quinton de Koch” if you guys are tired,… you can retire…”

Even the head coach Flower was Impressed at the score the duo had gathered. Here is what he revealed after the match.

“It’s a helluva score, they batted beautifully. We’ve been seeing some special batting from both of them this season and again that was brilliant to watch. They are both beautiful batters to watch.”

At the mid-break coach even asked the duo if they wanted to retire but after they had some refreshments the duo just pressed on full steam ahead guiding Lucknow to 210 runs.

“At the end of the 18th over, we sent a message saying, ‘If you guys are too tired hitting the ball hard, you can retire and we’ll send some of our big-hitters in.” These boys, all of them, from 1 to 9 can hit the ball hard like that.”

Quinton de Kock Day | QdK is the Player Of the Match

De Kock was recognized as Player Of The Match for his unbeaten 140 runs in 70 balls, Courtesy of 10 fours and 10 sixes each, and an incredible catch. He scored at an impressive strike rate of 200, for which the head coach Flower had high praises for the Southpaw cricketer for his free-flowing shots. He said, “One boundary is a big boundary, so Quinton hitting balls like that, who’s not renowned for his big-hitting actually, that’d have given him a lot of satisfaction.”

Quinton De Kock was shining on his mantle as the Seamers, and seasoned Spinners fed balls in the slot, which the South African met with his extensive shot selection cruising to his hundred in the 18th Over with a cut shot off Russel. the was excitement was visible as he was down on his knees celebrating.

The commentators go wild as Mohsin Khan to Venkatesh Iyer, out Caught by de Kock!! It was a one-hander stunning catch Wow! Rename this day as Quinton de Kock Day. He can do no wrong today and might have just pulled off the catch of the season.

The LSG skipper did his part as he made his way to his third half-century of the season. The batsman also completed  his 500 runs in the tournament for the fifth season in a row

KKR gave away two points easily as they chased the extremely high total. They were reduced to 132/4 in 14 overs. But the skipper Shreyas Iyer changed the trajectory of the match as he gathered an astonishing 29-ball 50. Also, Andre Russell was in great form with the bat leading the team home and almost concluding with a win. Despite Iyer and Russell’s heroic efforts, KKR had fallen short of 2 runs. KKR is currently at the sixth spot in the points table. While the team has played all its league matches, its qualification into the playoffs will depend on where Rajasthan Royals, Delhi Capitals, and Royal Challengers Bangalore stand on the points table.