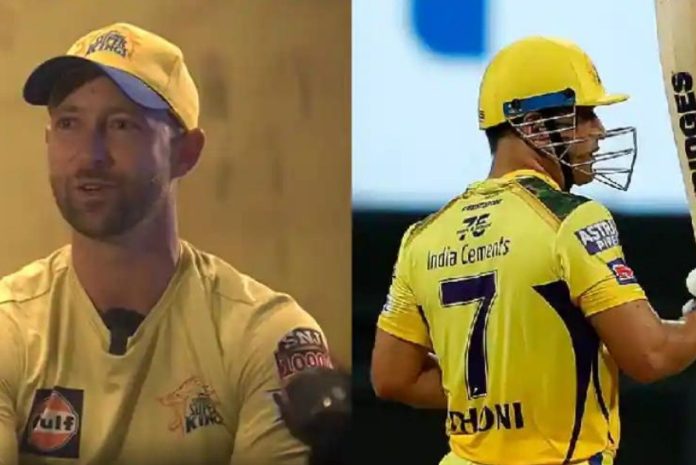 Chennai Super Kings opener Devon Conway revealed his conversation with MS Dhoni if the latter was sure of leaving the captaincy. The Kiwi cricketer was bought by CSK in the IPL auction at a price of INR 1 Crore. He played in the season opener for CSK but failed in clicking a good knock with the willow.

Devon Conway has established his reputation as one of the most destructive openers in franchise cricket. He has done a great job playing for New Zealand in the past year. This is one big reason why CSK picked him from this year’s IPL Mega-Auction. The southpaw has scored 602 runs in 20 T20Is playing for BlackCaps. And, he is expected to replicate the same in the ongoing 15th edition of the Indian Premier League.

Recently, Chennai Super Kings took to their Twitter handle and shared a clip of having a freewheeling conversation with Devon Conway. In the video, the Kiwi cricketer was heard saying that he asked MS Dhoni if he is sure about leaving the captaincy.

“I was wanting to play under the great MS as captain. I had a nice little conversation with him. I said, ‘you’re sure you don’t want to captain one more season so I can play under you as captain?’ But he said, ‘no, but I am always going to be around anyways. It was really cool.”

Meanwhile, he also added that Jadeja and Dhoni are very humble personalities. As per him, Dhoni is the best player to have played in the history of the Indian Premier League.

“A couple of days ago I had lunch and sat in between MS and Jaddu (Ravindra Jadeja). It was really cool just to get to know them better.” He said that both Dhoni and Jadeja are very humble and down-to-earth. Conway termed Dhoni as the best player in IPL history.