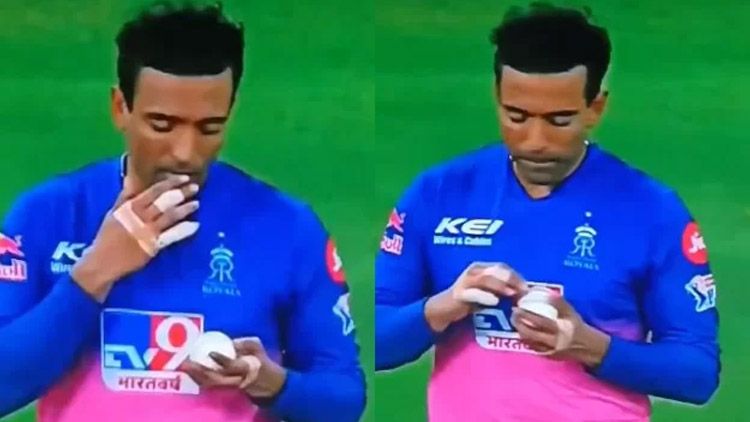 Rajasthan Royals got off the mark in the tournament quite brilliantly. They registered back to back win in the tournament. But, their winning streak came to a halt against KKR. Steve Smith and Co. failed to grab their third consecutive win. Meanwhile, their middle-order batsman Robin Uthappa was spotted breaking ICC Code and Conduct that might land him in big trouble.

In the post-pandemic era, ICC had taken strict action to protect every player from getting infected with the novel virus. They amend cricketing rules which included that a player cannot use saliva to shine the ball as it increases the risk of getting COVID-19 positive. This came out as a major setback for the bowlers. Moreover, ICC cleared that the players, who will break the rules will have to face a ban.

During the game between KKR and RR, Robin Uthappa was spotted breaking the rules. In the third over of the inning, Sunil Narine smacked the ball in an attempt to score a six over mid-off. But, he failed to get his timing right. The ball straight went into the hands of Robin Uthappa. But, he dropped quite an easy catch. Just after that, he was spotted applying saliva on the ball. And, this instance might have caught in the eyes of authority. Also, there is a possibility that Uthappa might be fined or banned in IPL.

Robin Uthappa looks certainly out of confidence. He has so far struggled to score runs with the bat for Rajasthan Royals in IPL 2020. In the third game, he scored 2 runs off 7 balls before getting out of Shivam Mavi.

Rajasthan Royals lost that game against Kolkata Knight Riders by 37 runs. It was the first defeat of RR in this tournament. They are currently on the third position in the league table with 4 points. From RR, Tom Curran managed to score his maiden IPL fifty. And, Shivam Mavi was awarded the Man of The Match award for registering bowling figures of 2 for 20 RR will next be seen in action against Royal Challengers Bangalore on October 3.

Here is the clip of instance: