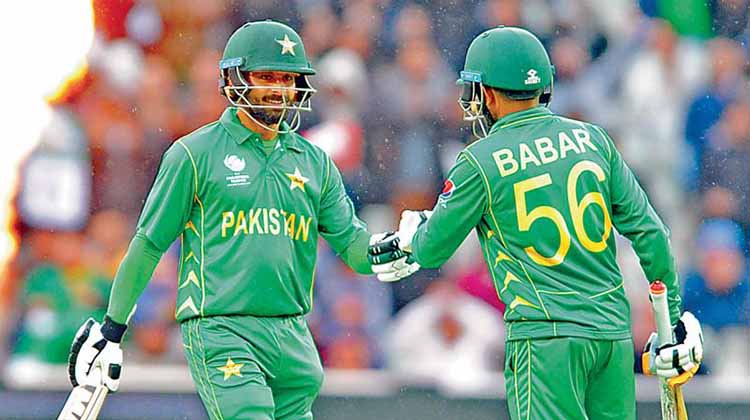 Babar Azam, the new Pakistan batting sensation has performed brilliantly in the last couple of years. He has taken Men in Green’s batting charge in his hands after Misbah-ul-Haq, Younis Khan bid adieu to cricket. As a result, he was appointed as the skipper across all the formats by PCB.

He bats at number three in ODIs and as an opener in T20Is. Now, Mohammad Hafeez has given his opinion and said that the Pakistan skipper should bat in the middle-order against Zimbabwe. He feels that the skipper can try a new opening pair during the T20I series against Zimbabwe.

The right-handed batsman is currently batting in the form of his life. He is performing well with the bat across all the formats. So far, he has gathered 2,147, runs in 94 T20s. In the latest, ICC rankings for T20I batsmen, he is ranked 2nd after Dawid Malan with 877 ratings.

He will be spotted in action in the upcoming three-match T20I and ODI series against Zimbabwe. In an interview, veteran all-rounder Mohammad Hafeez said that Babar has done well as an opener for Pakistan. However, in his opinion, it is a perfect time to test a new opening pair. As per him, this kind of series is always meant to test the bench strength of the team.

“I think in the upcoming series against Zimbabwe, we should try a new opening pair. I believe Babar should come lower down the order. This kind of series is a perfect opportunity to test your bench strength and give rest to seniors,” Mohammad Hafeez said as quoted by geosuper.tv.

After successfully hosting PSL, now Pakistan is all set to stage a T20I and ODI series for Zimbabwe. Recently, the PCB chief cleared that the series will be played in Multan and Rawalpindi. He also confirmed that England, Australia, and New Zealand have given their nod on touring Pakistan between 2021-2022.

“These teams [England, Australia, and New Zealand] have already confirmed that they will tour Pakistan in 2021 and 2022. Depending on the [global health crisis] situation, the coming years will see regular international cricket activities in Pakistan,” Khan said.