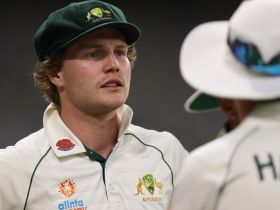 Will Pucovski Set To Undergo Shoulder Surgery; Out For Six months

Ravi Ashwin has been one of the best spin bowlers in the Indian squad. He has single handily won many matches with his bowling and batting but he was not given a chance in the recent series against West Indies and was said to sit back and watch the match.

Whereas if we look at his records and stats against West Indies, we will come to know that he had an excellent tour of West Indies every time he visited them. He has scored all of his test centuries against the West Indies but still he was forced to sit back and watch the match.

This led to thinking of a mishap that took place in the IPL 2019 where Ravi Ashwin tried to win the match for his team but was caught by Virat Kohli as a result of which he threw his gloves in the pavilion with anger. After sometime he was asked in an interview about his act. He answered that Virat Kohli and I play with passion to win and that is it.

But now after the 1st test match against West Indies rumours were spreading very fast so to clear all the false news he posted a picture on his official Twitter account and cleared that no such crack is present between him and Virat Kohli. In the picture both looked in a happy mood but still we will have to wait and see whether Ashwin gets a place in the 2nd test or not.

Seaside plus sunset is a deadly combination👌 pic.twitter.com/u7YpSQR9db