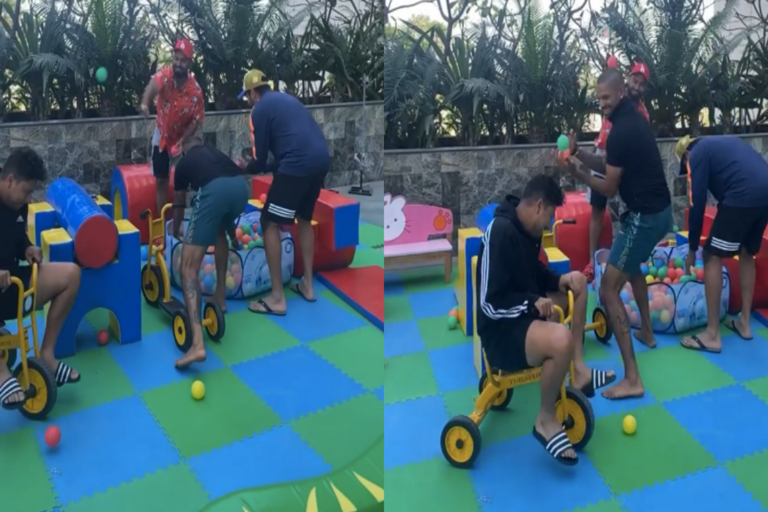 India has successfully managed to qualify into the finals of the maiden ICC Test Championship. They confirmed their seat in the high-profile final after defeating England in the recently concluded Test series. And, a clip has emerged on social media in which Indian cricketers Rishabh Pant, Shikhar Dhawan, Kuldeep Yadav, and Rohit Sharma can be seen playing with kids’ toys.

Rohit Sharma had a great series with the bat against England. He finished as the leading run-scorer from Team India with 345 runs in 4 games at an average of 46.00. Meanwhile, Rishabh Pant played a match-winning knock in the final Test that saved the game for the host. He once again hogged the spotlight on the back of his quick and scintillating knock in the 4th Test at Narendra Modi Stadium in Ahmedabad. Kuldeep Yadav only got a game to play but he is still working hard to get back into his top-notch form with ODI and T20I series set to begin in the upcoming week.

However, taking some time off from cricket all these players went down the memory land and were seen playing with toys in an outdoor area that looked like a school. The place is still unknown but witnessing our superstars playing in such a fashion was simply adorable and cute.

Shikhar Dhawan took to his Instagram handle and shared a clip in which Rishabh Pant and Rohit Sharma were playing with the plastic balls. On the other hand, Kuldeep Yadav was spotted riding a tricycle.

Coming onto cricket, now Team India will lock horns with England in the ODI series that will begin from March 12 followed by games on March 14, 16, 18, and 20.