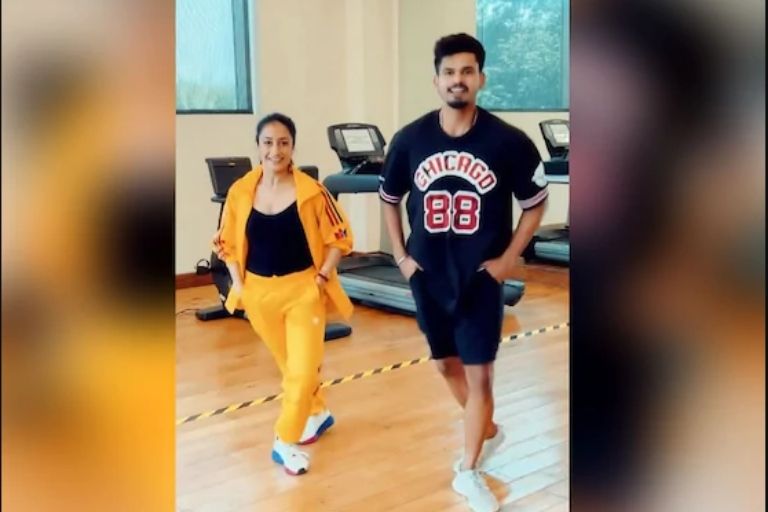 Shreyas Iyer, the right-handed Indian batsman was seen shaking legs with Yuzvendra Chahal’s better half, Dhanashree Verma. And, they got some decent reactions from Indian fans and players like Hardik Pandya. The clip got viral and has got more than 800k views in some time.

Shreyas Iyer has become the regular face of Team India in the limited-overs. He was last seen donning the national jersey against Australia in the T20I series. Although, the tour didn’t go down well for the 26-year-old. But, there is still a long way to go for Shreyas Iyer as a batsman.

On the other hand, Dhanashree Verma, who is a known choreographer by profession, tied the knot with Indian spinner Yuzvendra Chahal on December 22, 2020. She has been quite in the spotlight for her dancing style and dazzling moves flaunting in some of the big television shows.

Shreyas Iyer recently took to his official Instagram handle and shared a clip in which he can be spotted dancing with Dhanashree. He also gave a caption to his post that read,” Thinking on our feet @dhanashree9 @kishh.t.

In the clip, both the individuals can be seen flaunting their dance moves in sports outfit. And, the background gave a feeling that the video was recorded in a gym.

As soon as Hardik Pandya came across Shreyas Iyer’s post, he quickly left a comment that read,” Too Cool.” R Sridhar, India’s bowling coach also responded stating that he liked the video and watched it on loop,” Too good…watched it on loop,”

Shreyas Iyer is currently recovering from his shoulder injury due to which he was ruled out of the Syed Mushtaq Ali Trophy 2021. He captained Delhi Capitals in the Indian Premier League 2020 season and led the franchise to their first-ever final since the cricketing league came to its inception. Also, he finished as the 4th leading run-scorer with 519 runs in 17 games at an average of 34.60.

He is expected to be back in action against England in the T20I and ODI series. However, his injury will play a crucial role in his selection.