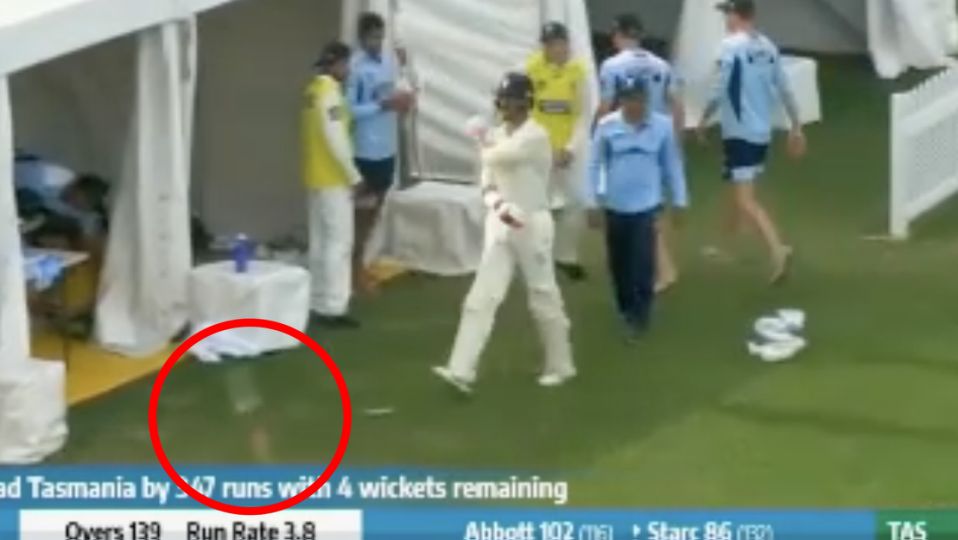 Mitchell Starc was left furious after being denied to score his maiden first-class Sheffield Shield clash between New South Wales and Tasmania on Tuesday. A clip has gone viral on social media in which the Aussie pacer can be spotted showing his anger with his expressions.

The 30-year-old has played 103 red-ball games for Australia and New South Wales. But, he has so far failed to score his maiden ton. He was on 86 when skipper Peter Nevill decided to declare the innings. He took such a decision just after Sean Abbott scored his century in the game.

New South Wales had got off the mark with an awful start in the game. They were dismissed at a low score of 64 runs in the 1st innings. But in 2nd inning, they marked a strong comeback on the back centuries scored by Nick Larkin, Moises Henriques, and Sean Abbott. And, NSW managed to post a big total of 522 runs for a loss of 6 wickets.

Mitchell Starc’s instance happened just after Sean Abbott scored his ton in the game. The Aussie pacer was not happy with the decision of his skipper. And, he expressed his anger by throwing his bat and gloves on the sidelines.

On the other hand, New South Wales pacer Trent Copeland gave a justified performance with the ball in the final 13 overs of the game. He dismissed in-form batsman Charlie Wakim and Jordan Silk in cheap. And, at the end of the day, Tasmania was struggling at a score of 21 runs with their two batsmen already being sent back to the pavilion.

On the previous day, Mitchell Starc gave pleasing news to the fans he will be part of the Big Bash League 2020. He has signed a contract with Sydney Sixers. The Aussie spearhead is making his return to the exciting league after a span of almost 6 years. He made his most recent appearance in BBL back in 2014.

Earlier, he couldn’t take part in the Big Bash League due to his international commitments. But, this season he will get a small window to play in the exciting tournament. He will be available for Syndey Sixers in a handful of games.