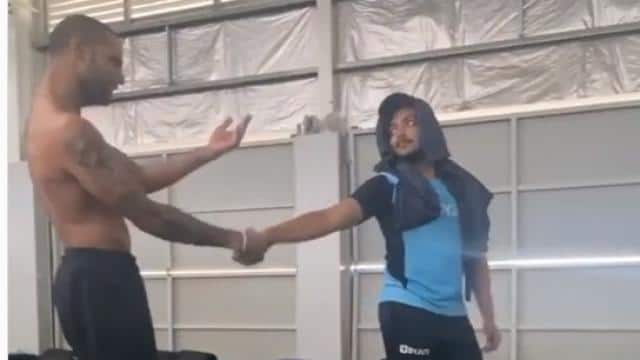 Shikhar Dhawan, the Indian opener had a great IPL 2020 while playing for Delhi Capitals. And, now, he has traveled to Australia for playing ODI and T20I series. The players have already hit the nets and sweating out hard in the practice sessions. After a hectic net session in bio-bubble, Shikhar Dhawan has shared a clip on social media flaunting his dance moves with young gun Prithvi Shaw.

The southpaw performed diligently well in the recently concluded Indian Premier League. He became the first player to score consecutive tons in the history of the tournament. Also, he finished as the top scorer from Delhi Capitals with 618 runs in 17 games at a good strike-rate of 144.73. He played a key role in making his side qualify for their maiden IPL final.

Shikhar Dhawan nicknamed “Gabbar” is very well known for his funny nature. He too often comes out with something funny for the fans. And, now he has shared a clip in which Shikhar can be spotted dancing in a hilarious fashion alongside Prithvi Shaw.

Both performed partner dance in which Shaw played the role of a girl. They flaunted moves on a famous and old Bollywood song “Saat Samundar Paar Main Tere”. Shikhar Dhawan took to his official Instagram handle and shared the clip with fans. He also gave a funny caption to his post that read, “Laila is still making me mad.”

The video went viral in a few hours and received funny reactions from fans. So far it has been watched by more than 5.6 million people.

Shikhar Dhawan and Prithvi Shaw both were picked in the squad that will travel to Australia. The former will play in T20I and ODI series. And, the latter is part of the Test team. Shaw didn’t have a good IPL season with the bat. But, selectors have still shown faith over the youngster. It is a golden opportunity for the 21-year-old to showcase his talent with the bat.