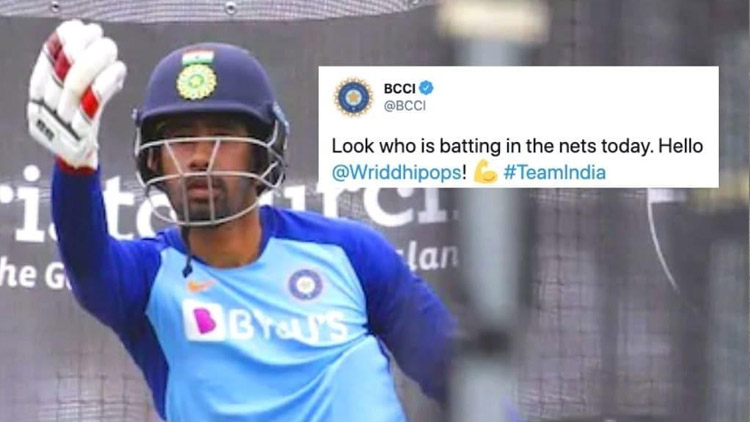 Wriddhiman Saha, the Indian wicketkeeper is on his road to recovery. He sustained an injury while playing for Sunrisers Hyderabad in IPL 2020. However, he was picked in the Test squad that will lock horns with Australia. The selectors felt that the 36-year-old will recover by the time the Test series arrive. And, now, BCCI has shared a clip in which Saha can be spotted taking throwdowns in the nets during a practice session.

Saha is reckoned as one of the best wicketkeepers in India at the moment. He did not get enough chances while playing for SRH. But, he came out with flying colors in a limited number of games he played for the orange army. Undoubtedly, he was one of the main reasons behind SRH qualifying for the playoffs. He amassed 214 runs in 4 games with the help of two amazing fifties.

Wriddhiman Saha Is Back In Nets, BCCI Shares A Clip

He was in impeccable batting form before he sustained an injury in both hamstrings that ruled him out of eliminator and qualifier. Now, there is good news for ardent followers of cricket that Bengal-born wicketkeeper is back in nets. He was spotted taking throwdowns from the Sri Lankan left-arm specialist Nuwan Seneviratne and Indian right-arm bowler Dayananda Garani.

BCCI took to its official Twitter handle and shared a clip with fans. They gave a caption to their post that read,”Look who is batting in the nets today. Hello @Wriddhipops! #TeamIndia.”

Wriddhiman Saha’s cricket career has been full of ups and downs. Earlier until MS Dhoni played for Team India, he was looked down on as the second-choice wicketkeeper. Later on, selectors gave enough chances to Rishabh Pant in order to prove his worth with bat and gloves. But, he failed on most occasions. Now, is the time when Saha is picked as the first-choice wicketkeeper for Team India in the longer format. So far, he has 37 Tests and 9 ODIs in which he has managed 1279 international runs. As a wicketkeeper, he has done a great job by taking 92 catches and 11 stumpings in Tests.