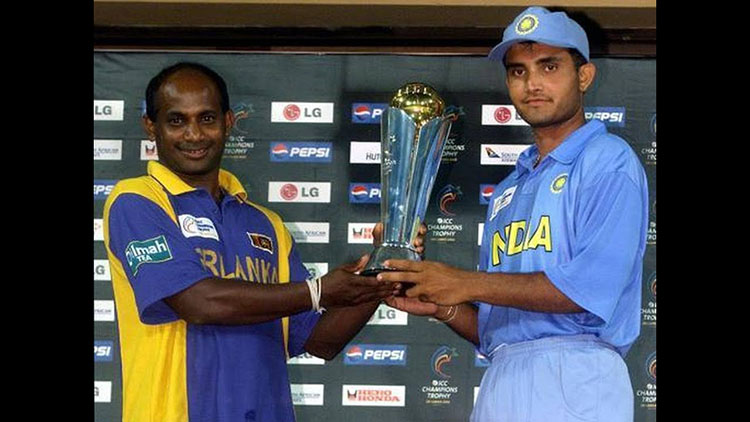 The 2002 edition was the first and only ICC Trophy with no obvious champion. The third edition of ICC Champions Trophy in 2002 saw a unique result with joint winners, India, and Sri Lanka.

The two teams met in the finals after defeating South Africa and Australia only to be intervened by bad weather. The game had to be rescheduled twice while the match was in progress. The ICC’s existing rules for these situations indicated that the championship had to be shared by the Finalists.

Many cricket lovers believe that Indian cricket reached a major milestone after the winning of the 2002 NatWest Series. The Indian team gained prominence in 2001 after defeating Australia in a series of matches at home. This led to a confidence boost in the team that ensures a steadily improved performance in general.

India won several matches with some of the most amazing performances at both home and abroad under the captaincy of Sourav Ganguly. This was the time when the team comprised of some of the most talented younger players like Virender Sehwag, Yuvraj Singh, Mohammad Kaif, Harbhajan Singh, and Zaheer Khan while the core was complete with the veteran players like Sachin Tendulkar and Rahul Dravid who helped to improve the team performance with their experienced guidance.

India could show more of their prowess with the opportunity to participate at the ICC Champions Trophy in 2002. Originally known as ICC KnockOut Trophy, the name was changed to ICC Championship in their third and the same season where the bizarre joint championship between Sri Lanka and India took place. The tournament was meant to be held in India, but finally, Sri Lanka hosted it after ICC was refused tax exemptions by the Indian government.

The Australian team during these times were among the top names in cricket teams with great performance across tournaments. South African team on the other hand was known for its skilled players and all-round performance, although their ability in terms of the crunch games remains questionable.

The ICC Champions Trophy tournament had Sri Lanka as one of the pre-tournament favorites. The team had a combination of players skilled in each of their fields. Led by Sanath Jayasuriya, who was at his best at the time, the Sri Lankan team consisted of world-class players like Aravinda de Silva, Kumar Sangakkara, Marvan Atapattu, and Mahela Jayawardena.

Similarly, the core Indian team led by Ganguly, had some of the best class players, both batsmen and bowlers, of all time. The additional spin bowlers could also pose as great frontline bowlers. Yuvraj Singh and Kaif were two of the best all-rounder players who played exceptionally well throughout the tournament.

Sri Lanka faced Pakistan and defeated them in the first game of the tournament bowling them out for 200. In this match, captain Jayasuriya pulled a century.

On the other hand, India started off with a rather bad situation. In their match against Zimbabwe, India was batting first with only 87 runs and 5 wickets out at one point. This is where Dravid and Kaif came to the team’s rescue and completely changed their fate.

Around this time, Dravid was at the prime phase of his cricket career. He was a true all-rounder with the capability to defend his team on all aspects. From scoring a huge number of runs to an excellent wicketkeeping, Dravid maintained a strong balance throughout the games.

The middle-order batsman positioned at #7, Kaif, was becoming an indispensable part of the team during this match. As the first 5 batsmen fell quickly, Kaif was able to score his first century for the Indian team at the match against Zimbabwe. Although Andy Flower of Zimbabwe made 143 runs to make it harder for India to win, the Indian team ultimately won the match.

England was the next team to play against India. The team was unfortunately still recovering from the loss at the NatWest Series by India. After hitting the pitch to bat first, The English team scored 269 runs. This score was quickly taken over by India when the opening batsmen Ganguly and Sehwag scored a century each.

In the semi-finals of the tournament, Australia faced Sri Lanka while South Africa played against India.

The first semi-final started with the excellent batting of the pair Sehwag and Ganguly. However, the team took a temporary hit when it lost Sehwag and Laxman in a row. This situation was soon improved by Yuvraj and Dravid who made steady runs and helped India score 261 runs in total.

When South Africa started batting, they scored 192 for 1 as Gibbs went on to bat with 116 runs. This was his second century during the tournament. South Africa now required a mere 70 runs with 12 overs left. At this, the Indian team led by Ganguly showed their exceptional bowling and fielding skills and took the smallest opportunities to focus and win the match.

If YouTube were popular during this era, it would have surely captured the brilliant fielding by Yuvraj Singh who took multiple wickets including Smith and made a full-stretch leap to catch the ball by Jonty Rhodes. Next, Sehwag was put into the field during the 42nd over. This led to the dismissal of two good batsmen, Mark Boucher and Boeta Dippenaar. Jacques Kallis got stuck at the pitch and Lance Klusener never got a chance to play. The entire setup directed India towards an unlikely win.

The second semi-final was even more dramatic due to the performance of the Sri Lankan spinners. With the Australian team batting first, they could gather only 16 runs against De Silva’s bowling for 10 overs. Australia lost to Sri Lanka with 162 all out.

The final between India and Sri Lanka started on 29 September 2002 but could not be completed despite rescheduling twice due to heavy rainfall. On both the days, Sri Lanka batted first scoring 244 and 222, respectively. Unfortunately, Indian team never got the chance to bat enough as rain hit them both the times. A correct ruling could not be done due to this unfortunate and unforeseen incident.