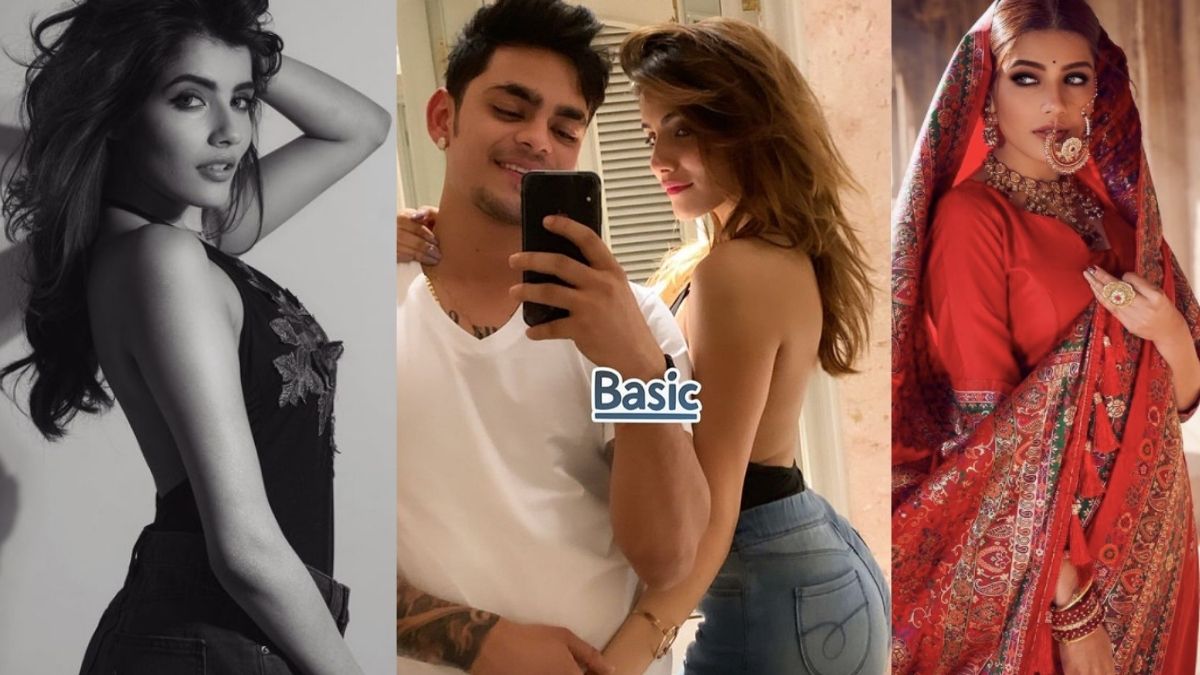 It’s not that she needs an introduction. She was pretty popular even a  few years back, but it does take even s small event to become an overnight sensation. She was one of the big-timers in the Fashion Industry but then one of the many.

The small event we talked about happened quite unexpectedly when she was a mere spectator watching an IPL match. And she was supporting the new hero in the Mumbai Indians outfit. Well, he is no less famous, and his name is Ishan Kishan.

It was by ‘ accident’ the cameraman caught the beauty in the stands. The crowd went wild seeing her appear, again and again, cheering MI and especially Ishan.  It was a matter of time that Instagram displayed photos of them together and dating too! Ishan himself was turning handsome from cute to stunning. The rumors have become true now. And the sporting public is delighted.

Ishan Kishan is always in the limelight more than her, but the shift towards her is also slowly but surely happening. Find below everything you need to know about Aditi, the schoolgirl who transformed herself into fashions most spoken about Girl.

According to the latest estimates, Aditi Hundia’s (Ishan Kishan’s Girlfriend) net worth will be 35 lakh Indian rupees. She has several sources of income, including modeling, fashion designing, music videos, and influencing Instagram. Her lifestyle at the moment is luxurious. Her present job pays her an incredible rate of salary as well.

Born on January 15, 1997, she is 24 years old. In addition to her schooling at India International School, she also studied at St. Xavier’s College in Jaipur (Rajasthan). She was born to Lalit Hundia and Babita Hundia. Her brother Yash Hundia is more close to her.

Years rolled by, and Aditi Hundia (Ishan Kishan’s Girlfriend) flowered into beauty by the time she turned 19 years in 2016. She participated in Elite Miss Rajasthan 2016 and secured the position of the first runner-up. She has also won titles like Miss beautiful eyes and Miss Body Beautiful in the very same pageant. A triple victory in her very first catwalk! She completed her schooling at India International School. Furthermore, she studied Business Administration at St. Xavier’s College in Jaipur.

Aditi Hundia takes us down on the lane of achievements and the lesser-known side of her. Her next conquest was the FBB Colors Femina Miss India Rajasthan 2017! It looks like a catwalk, and fashion is an inherent trait found in this beauty! She had a secret, and her biggest dream is to be part of the Indian Women’s cricket team and a relentless desire to leave her mark on the fashion and glamour industry! Fashion Won, of course.

In this passage, any Aditi fan would know about her early years, ambitions, and her first real big success.

Placards screamed, ‘Welcome Miss Supranational 2018’ all along the way from the Rajasthan Airport. Aditi (Ishan Kishan’s Girlfriend) landed at the Jaipur International Airport on Saturday to shower rose petals, bouquets, and garlands. Aditi’s family and friends gave her a warm welcome after being crowned the title in Mumbai on August 31, 2018.

“I am finally home. I feel extremely overwhelmed to see my family and friends after such a long time. I am coming to Jaipur for the first time after winning the crown and I can’t wait to share my happiness with my close ones,” Aditi told us at the airport. She then headed to her home in Civil Lines, which was decked up to welcome her. With dhol beats and her friends and neighbors dancing alongside her, Aditi made an entry by walking on the red carpet, rolled out for her.

“She has made us and the entire country proud. People have been wishing us from the day she was crowned Yamaha Fascino Miss Diva Supranational 2018. I had been eagerly waiting to meet her and spend some time with her,” said her mother, Babita Hundia.

After spending some time with her family at home and cutting a cake, Aditi headed to her alma mater India International School (IIS). “I have always been a punctual student. I can’t be late for my school!” she exclaimed.

More Nostalgia continued when Aditi met Ashok Gupta, the Director of IIS, after which she met the students. “I would like to express my gratitude to Gupta Sir and Mala (Agnihotri, principal of the school) ma’am. I remember when I was studying, I would see the head girls standing behind the podium and giving a speech. It was one of the things on my bucket list. Today, I have checked that off my bucket list as I am standing here and talking to you, not as a head girl, but as Yamaha Fascino Miss Diva Supranational 2018,” Aditi said while addressing the students.

Aditi then went to her XII classroom to relive her school days. She was all smiles as she met and hugged her favorite teacher Rachna Kapoor, who teaches Sanskrit.

She then addressed a press conference at Royal Establishment – Diggi Palace, Jaipur, which played the perfect hospitality and venue partner. Later in the evening, Aditi attended the Women Of The Future Awards 2018, where she was felicitated by TV actor Barun Sobti and walked the ramp with him.

The spark between Ishant Kishan, the dashing batsman of MI, and India has certainly come a long way by now. Both were in denial, but the Indian Fans dig deep and are confident of their romance. Aditi is a hard-core fan of Dhoni and Virat Kohli, but all that changed.

Recently, she was spotted supporting Mumbai Indians and Ishan Kishan during the Indian Premier League (IPL). During the 2020 IPL, Ishan Kishan opened his arms and took on RCB’s bowling, which looked fragile at the death. The Mumbai-based franchise needed 19 runs off Isuru Udana in the last over, and Kishan smashed the pacer for two sixes.

He had brought the target down to five from two. But to his dismay, he perished in the penultimate delivery, trying to clear the ropes. He got out after scoring 99 off 58 with the help of two fours and nine sixes.

The camera caught him sitting disappointed, but Aditi Hundia dropped a post for him on her Instagram story. She posted a screenshot from the game and wrote, “I am so proud of you baby.”

She makes sure to cheer for her rumored boyfriend, Ishan Kishan.

During one of his spectacular knocks against CSK, Aditi took to her Instagram story to admire Ishan. Her comments can be seen very much on the posts of the keeper-batsman.

Ishan Kishan and Aditi Hundia have been in a relationship for over two years now. The duo could be seen in each other’s social media posts. They do not mind posing for photographs anymore, nor do they deny it at all.

Who is Ishant Kishan?

Here is a small passage dedicated to the swashbuckling batsman who has consistently been in the cricketing headlines since 2018.

Ishan Kishan was born on July 18, 1998, as Ishan Pranav Kumar Pandey Kishan and has completed 23 years. His height in meters is 5 Feet 6 Inches, and he weighs 60 KGS.

How Aditi Hundia manages to stay so fit?

She is a fitness freak. and works hard in the gym

Who is Aditi Hundia’s favorite actor?

A movie that made Aditi Hundia cry?

What is Aditi Hundia’s biggest fear?

What is Love according to Aditi Hundia?