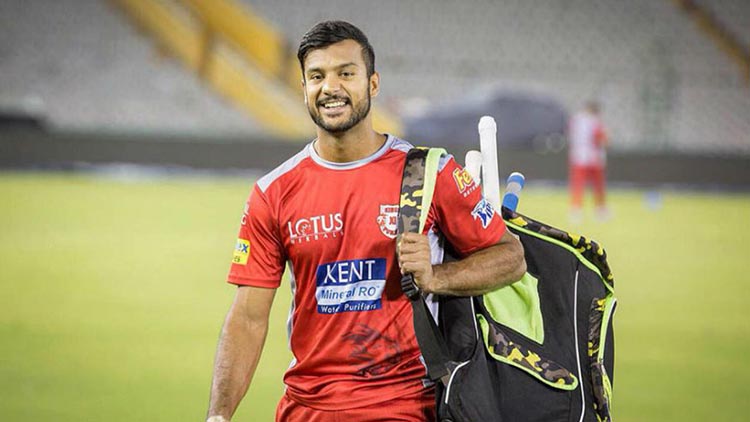 Who is Mayank Agarwal?

Mayank Anurag Agarwal is an International Cricketer from India, who plays for the Indian state of Karnataka, and is a right-hand batsman. His International debut came for India against Australia on 26 December 2018.

Mayank is renowned for showing great elegance and stroke playing ever since his early days. However, it was his performances in the U-19 Cooch Behar Trophy in 2008-09 that provided him with the limelight.

Also, his performances in the 2010 ICC U-19 Cricket World Cup further polished his skills being a batsman as he was the leading Indian run-scorer.

During the Karnataka Premier League (KPL) in 2010, he was declared as the Man of the Series – the icing on the cake was his century that he scored in the Tourney.

He studied at Bishop Cotton Boys’ School and Jain University in Bengaluru.

Mayank Agarwal was born on 16 February 1991. Mayank Agarwal Family consists of his father, mother & his brother. His father is Anurag Agarwal, who is a builder. He and Raj Kishan, his brother, used to play at the State level Cricket. His mother’s name is Suchitra Singh. Mayank got married to Aashita Sood in June 2018. His wife is the daughter of the Police Commission of Bengaluru, Praveen Soon. Agarwal and Sood knew each other for years as they studied in the same school and college. His wife is now his Manager. Indian opener KL Rahul, another Karnataka player, is the close friend of Agarwal. They both played for Karnataka for years and even represented India in the U-19 World Cup in 2019.

Mayank Agarwal Wife name is Aashita Sood. Mayank and Aashita were actually friends, gradually their friendship turned into love and they got engaged in 2017 & finally got married on 4th June 2018. Aashita is a lawyer by profession.

Mayank Agarwal has a massive following on social media. He has over 3.5 Million followers on Instagram and Twitter combined.

Mayank Agarwal Net Worth is estimated to be around $1 Million – $5 Million (Approx.). He is a Grade B Player in the Indian Cricket team, which means he has an annual salary of ₹3 crores. Also, he plays for Kings XI Punjab in the IPL. He was retained by KXIP in 2020 with a salary of ₹1 crores. Fast&Up recently signed Mayank Agarwal as their Brand Ambassador.

The fee of Mayank Agarwal for being a part of the RCB Team in the IPL was Rs.10 lakh per year for 3 years. Delhi bought him for Rs.1.6 crores and was transferred to RPS on the same price tag. Kings XI Punjab later signed him up in 2018 for Rs.1 crore. If you consider the worth in the IPL, KPL, Domestic and International Cricket, the net worth of the batsman should be around Rs.12-13 crores.

Mayank has earned around ₹ 97,000,000  from IPL to date. Here is a detailed breakdown of his IPL earnings –

While playing for India in the Under-19 Cricket World Cup in 2019, Mayank Agarwal was among runs. His IPL career began in 2011 with his home state Team, the Royal Challengers Bangalore (RCB) signing him. He played in his debut game against Australia in 2018.

Mayank Agarwal has scored the highest number of runs in the domestic circuit. Across all formats in 2017-18, he scored a total of 2,141 runs.

Mayank was awarded the Madhavrao Scindia Award in June 2018. It was presented to him for being the highest run-scorer in the Ranji Trophy. The award was given to him by the Board of Control for Cricket in India (BCCI).

The Domestic career of Mayank Agarwal took off in 2010 when he made his debut Vs Jharkhand. But he was unable to play as per his potential. In 2014-15, he had to face fitness concerns and had to work on his mental and physical aspects. All these paid off well as he made a strong comeback. He scored a triple century in the Ranji Trophy’s 2017-18 seasons Vs Maharashtra. He also scored a total of 1000 First Class runs in the same month he hit the triple ton.

The Royal Challengers Bangalore got him in the IPL 2011, but he could not score much. The Delhi Daredevils (now, Delhi Capitals) bought him in 2014, but he left the Team to join the Rising Pune Supergiant (RPS, now defunct) in 2017. A lot of IPL Teams were interested in buying him after he had a fantastic Domestic season for IPL in 2018. Kings XI Punjab got him at a price of Rs.1 crore in the end.

Mayank Agarwal was included in India’s Test Team for the West Indies Series in 2018, but he did not feature in the final playing XI. His Test debut finally came against Australia in December of 2018 at the iconic Melbourne Cricket Ground (MCG). In the first innings, he played a knock of 76. It was the highest by an Indian bat on Test debut Down Under. In this process, he broke Dattu Phadkar, a 71-year-old record. In the 2019 ICC Cricket World Cup in England, he was called in as a replacement for the injured Vijay Shankar.

Mayank Agarwal through the Year in the IPL

What would your strategy when you are about to face none other than the Muttiah Muralitharan and that too for the first time? The 20-year-old Mayank Agarwal hit him for a six by slog sweeping while making his IPL debut playing for RCB in 2011. It is how he announced his arrival into the IPL scene. Mayank has been an aggressive batsman and has never been afraid to hit bowlers – even the best ones. His first IPL 50 came against a formidable Mumbai Indians (MI) at a 200 strike rate. He went after the likes of Lasith Malinga, and his knock included 4 sixes and 6 fours. Despite being a big hitter, what he lacked was consistency. His 2nd 50 in the IPL had to wait for close to 3 years. During the 2018 IPL season, he was picked by Kings XI Punjab and was given enough chances. Yet, he could accumulate only 120 runs in 11 games.

Virat Kohli had said that the performances of the players in the IPL would not be considered as a benchmark while picking the Team for the World Cup 2019. Thus, despite having a mediocre outing for Kings XI Punjab, Agarwal got rewarded on the basis of merit. Hence, he took the flight to England for replacing the injured Vijay Shankar for the 2nd phase of the marquee Tournament. The injury that Shikhar Dhawan had got denoted that KL Rahul would be pushed up the order with Rohit Sharma. Even when KL Rahul had a bad WC, he was asked to open in the Semi-Final Vs New Zealand. The Black Caps went on to defeat India in the match. It saw India crashing out of the Tournament, and it also meant that the hope of Mayank playing in the XI was gone. However, that did not deter the Karnataka bat from scoring runs in the purest format of the game – the Tests! He had a ho-hum Tour of West Indies but made up for everything in the home Series Vs the Proteas. He hit 340 runs (including a ton and a doubleton) in 3 games. He was also the 2nd highest run-scorer for India behind Rohit Sharma in this Series.

After the Test was completed in 4 days, he went back to play for Karnataka to feature in the Vijay Hazare Trophy Semi-Final match. He had a great game with a cameo of 47* in 33 balls against Puducherry. The knock helped the Team chase a total of 224 easily. Even in the Final, he contributed with the bat with an inning of 69 Not Out. It helped the Team pocketing the prized Vijay Hazare Trophy for the 4th time. Mayank Agarwal is now among India’s top contenders for the opener position in the Indian Test Team.

Now we take a look at Mayank’s Cricket Career, his major cricket stats & cricket Milestones achieved by him