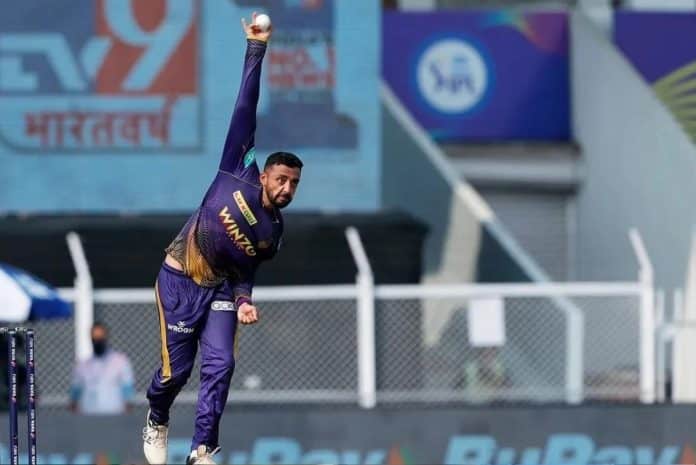 Varun Chakravarthy is an Indian cricketer who has represented the national team. Born on 29 August 1991, the spinner has risen to become one of the best spin bowlers in the country.

Owing to his prowess, the Tamil Nadu state team bowler made his T20I debut for India on 25 July 2021 against Sri Lanka. He has also played for the Indian team in the 2021 T20 World Cup.

Varun Chakravarthy has also been a part of the Indian Premier League. The spinner has played for the Kings XI Punjab in 2019. Since 2020, he has represented the Kolkata Knight Riders. KKR paid 8 crores to retain Varun before the 2022 IPL auction!

In this article, we will have a look at Varun Chakaravarthy’s Salary, Net Worth, Personal Information, Career details, Wife, Controversies, FAQs, etc

Varun Chakravarthy Net Worth: Varun Chakaravarthy’s net worth is reported to be around $3 million or approximately 23 crores in Indian Rupees. The Chennai-based spinner has earned his net worth through endorsements and his salary during his playing career, his investments, etc.

Chakravarthy lives in a multi-story home along with his wife and parents at the moment. The locality of this spacious home is not known at the moment. There is a parking facility and lawn outside his home. Apart from this, we don’t have any other information about the spinner’s home.

The mystery spinner rose to the ranks during the Tamil Nadu Premier League. This eventually gave him a place in the Vijay Hazare Trophy 2018/19 for his state team.  Following his terrific performances in List A cricket, Varun was placed in the 2019 IPL Auctions.

Indian Premier League: Varun Chakravarthy was bought by the Kings XI Punjab for 8.4 crores in the 2019 IPL season. The bowler would play just one match and have figures of 1/35 against KKR. KXIP released him at the end of the season.

The Mystery Spinner joined the Kolkata Knight Riders in 2020 and has since become a mainstay on the side. He picked up 17 wickets in 13 games in IPL 2020. Hence announcing himself in Indian cricket.

Varun followed it up by picking 18 wickets in IPL 2021 and was hence retained before the IPL 2022 auction for 8 crores by the Kolkata Knight Riders.

Indian Team: Owing to his prowess with KKR, Varun Chakravarthy was given a chance to play for India in 2021. The spinner made his debut against Sri Lanka on 25 July 2021. He was also selected in the team for the 2021 ICC T20 World Cup but the bowler is yet to impress in the Indian colours.

We believe that Varun Chakravarthy will add more individual accomplishments to this list in the coming years.

Neha Khedekar: Varun Chakravarthy got married to his long-term girlfriend Neha Kedekar on 11th December 2020. The couple got married in a private wedding with friends and family in Chennai, Tamil Nadu, India.

It is not known what Neha Khedekar does for a living. Her educational background and other personal details are also unknown as she has not shared much about herself to the media.

Dodgy Knees: The Indian spinner played in the T20 World Cup 2021 in UAE. But his participation was in doubt as he was reportedly suffering from a knee injury. Despite this, the management picked him up. But this didn’t pay off as India bowed out of the tournament in the  group stages

Apart from this, there are no other controversies that surround the player at the moment. Varun Chakaravthy has been highly professional throughout his cricketing career for his domestic team. The Indian bowler has not been part of any spat or controversy on and off the field. Hence we hope that he continues this reputation throughout his career.

The Indian spin bowler is active on social media as well

Varun Chakravarthy generally posts about cricket, his pastime activities, and his friends and family.

Yes, Varun Chakravarthy has played for the Indian Cricket Team in the T20I format.

Yes, he is actively playing professional cricket for the Kolkata Knight Riders, and his domestic team Tamil Nadu.

Q- Against whom did Varun Chakravarthy make his India debut?

Q- Who is Varun Chakaravarthy’s Wife?

Varun Chakravarthy is married to Neha Khedekar. The pair got married in 2020.

Q- Who does Varun Chakravarthy play for in the IPL 2022?

Varun Chakravarthy plays for the Kolkata Knight Riders in the Indian Premier League. KKR retained him for 8 crores before the 2022 IPL Auction.

Q- What did Varun Chakravarthy study at SRM University?

The Spinner has a degree in Architecture from SRM University, Chennai.