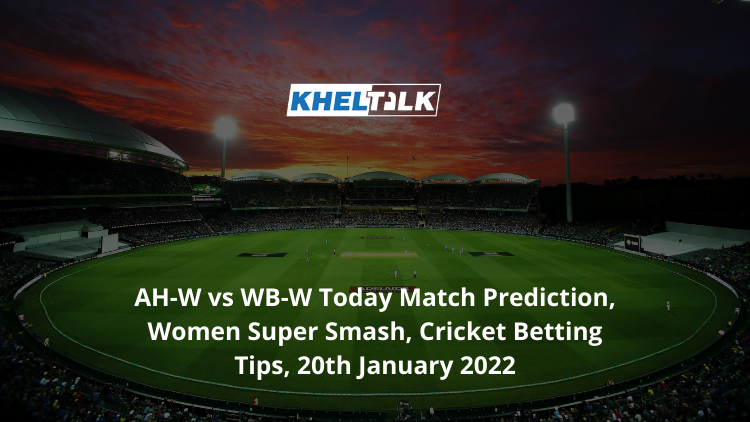 KhelTalk is the only destination that brings you the finest today match-winner prediction that you can trust. We are here for AH-W vs WB-W, Today Match Prediction, Women Super Smash 2021-22, Online Cricket Betting Tips, which will provide every user with a clear picture of which team and in what aspect they can place their bets.

Auckland Hearts Women will face Wellington Blaze Women in the 8th match of the Women Super Smash of this season as Eden Park Outer Oval in Auckland will host this fixture. They are currently placed in the 3rd spot on the points table with four wins and four losses in the tournament so far.

They faced Canterbury Magicians Women in their last outing which they won by 8 runs. After being asked to bat first Auckland posted a target of 131 runs by the end of 20 overs. Katie Perkins was their highest contributor with 29 Runs while Isabella Gaze and Saachi Shahri put up a brief partnership of 40 odd to take their side to a decent total.

In return, the Magicians’ innings concluded at 123 by the end of 20 overs as the Hearts bowlers put a great effort collectively to restrict the Magician batters. All of their bowlers picked wickets while Arlene Kelly starred with the ball bagging two scalps with a 3.25 Economy.

Wellington Blaze is currently in a good zone in this tournament, as they too haven’t lost a single game so far in this tournament. They batted first in most of the matches and restricted the opposition by large margins. Currently, they are sitting on the top of the points table with 32 points having won eight out of eight games played so far.

Wellington faced Northern Brave in their last match which they won by eight wickets. After electing to bat first the Braves managed to reach a total of just 46 Runs as they couldn’t withstand the lethal bowling attack of Blaze. Xara Jetly completely annihilated the Brave batters bagging four scalps with an exceptional economy of 0.33 while Amelia Kerr picked three scalps.

In return, an unbeaten 20* and 11* from Sophie Devine and Maddy Green consecutively helped them to chase down the target in just 6.2 overs. They haven’t set a foot wrong so far in the tournament and both their departments look in lethal form.

The weather is expected to be mostly cloudy in Auckland during the course of this match while the chances of rain are very low. The temperature will hover around 18-25 °C

The pitch at Eden Park Outer Oval is a balanced one. The new ball comes nicely onto the bat and expect the batters to play their strokes freely right from the start of their innings. The bowlers need to be accurate with their line and lengths while bowling on this surface.

AH-W vs WB-W, Who will win the match, Today Match Prediction

Wellington definitely looks like a more balanced side than Auckland Hearts with their in-form key players like Amelia Kerr and Xara Jetly. Backed by all wins so far in the tournament they are clear favorites to win this contest. Their bowlers performed exceptionally well in restricting the Braves to a mere total of 46 Runs.

On the other hand, Auckland is struggling with the overall performance of its squad in both departments. While their skipper, Lauren Down is the only player who has delivered so far in the tournament. Their whole batting lineup got knocked over by Canterbury in their last match for a low total. They really need to be on their toes to defeat the top team in the tournament.

Perkins has always backed her side in every match possible. Once against Otago where she scored 29 Runs in 32 to take her side for a respectable total and again in the last match playing an important knock of 29 Runs against Canterbury. She is currently the second leading run-scorer for Auckland and has amassed 151 Runs in 8 games. As the Hearts batting department is currently failing to perform she will be a safe pick to place your bets on.

Sophie Devine is a good pick for her all-around abilities as a player. Playing her first match against Northern Brave she remained unbeaten for 20* while opening the batting. She has developed into one of the leading all-rounders and most destructive batters in the game. Devine is a good pick if she plays in this contest and is expected to score big.

Though taking 7 wickets in 8 games so far Kelly is already way ahead of her peers and leading the wicket tally for Hearts Women. She was the only bowler who stood out in the last game against Canterbury where she bagged two scalps while conceding just 13 runs. We can expect some good bowling figures from her in this match as well. Kelly can prove to be a destructive batter in the top order as well and therefore is a good pick as a bowler to place your bets on.

The 20-year-old completely bamboozled the Brave batting lineup with her off-break bowling as she bagged her career-best 4 scalps in the last game while conceding just a single run. So far she has picked 13 wickets in 8 games with an impressive economy of 4.47. Jetly is a must-pick given the current form she is in with the ball and is expected to pick one or two scalps heading into this contest.