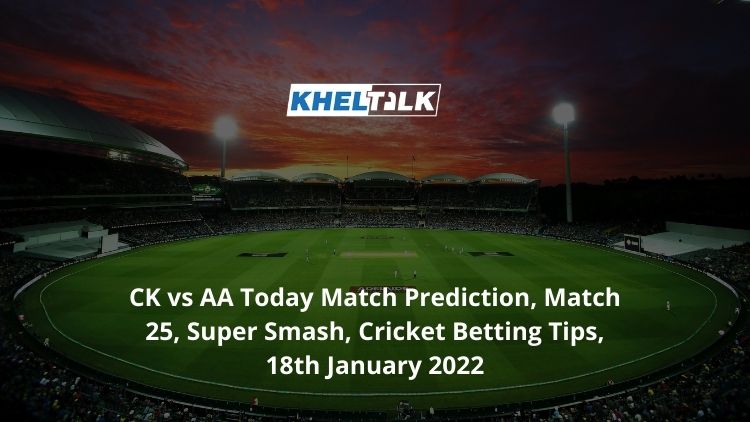 KhelTalk is the only destination that brings you the finest today’s match prediction that you can trust. We are here for CK vs AA, Today Match Prediction, Super Smash 2021/22, Online Cricket Betting Tips, which will provide every user with a clear picture of which team and in what aspect they can place their bets.

Canterbury Kings will face Auckland Aces again in the Match 25 of the Super Smash 2021-22 as Hagley Oval in Christchurch will host this fixture. They are currently placed in the second spot on the points table with five wins and two losses. They will be heading into this match with a recent win against Auckland Aces to back them up.

In the last game against the Aces, after being asked to bat first the Aces posted a target of 167 Runs on board. Todd Astle, Ed Nuttall, and Shipley took two scalps each for their side. In return, a half-century from Cam Fletcher helped Canterbury secure a win against the Aces.

They already have potential batters with the likes of Cam Fletcher and Chad Bowes but need to work on the performance of their bowling department as some of their bowlers are leaking plenty of runs. They will be looking to repeat the same performance in their upcoming fixture against the Aces.

After a shaky start to their campaign, Auckland Aces made a comeback in the tournament with three back-to-back wins in a row. They are currently placed in the 4th spot on the points table with 16 points and have four recent wins and three losses. They faced Otago Volts in their previous match where the Aces emerged victorious by a difference of one wicket.

After electing to bat first Otago managed to reach a total of 130 Runs as the Aces bowlers tightened their grip around the Volts batters. All of their key bowlers were successful to pick wickets at regular intervals to restrict Otago to a lower total. In return, as the whole top order of Aces collapsed at single digits, a 67* off 54 cameo from Sean Solia helped them seal the win.

They will be heading into this contest backed by a win but need to work on the performance of their top-order batters as we witnessed a major collapse in the last match. However, their bowlers look in good form with the bowl and are picking scalps collectively which is a good sign for them.

The weather is expected to be Partly cloudy in Christchurch and we can expect some sunshine in the later stages. The skies are expected to get clear as the day progresses. The chances for rain are low while the temperature will hover around 17-20 °C.

The pitch at Hagley Oval in Christchurch is a balanced track. The bowlers will get some extra zip off the surface with the new ball and we might see some lateral movement off the surface. The surface is expected to stay the same throughout the course of the match.

CK vs AA, Who will win the match, Today Match Prediction

Auckland Aces are expected to win against Canterbury Kings.

Despite a recent loss against the Kings in their previous encounter, the Aces made a good comeback in the last match against the Otago Volts. They look a more well-settled side than the Canterbury Kings at the moment.

Though the Kings have a deep-seated batting line-up with the likes of their skipper, Mc Conchie, Leo Carter, Chad Bowes, they are overly dependent on their key batters. When these three fail to perform on any given day their whole batting order collapses.

Bowes played a splendid knock in a previous match against Otago hammering a half-century in 32 deliveries while hammering 28 Runs with a strike rate close to 215 in the last match against Stags. He is currently the second leading run-scorer for Canterbury after contributing 183 runs in 7 Matches with a strike rate of 151. The 29 year old South African has scored 1792 Runs in 69 matches and has risen on many occasions before to score for his side in many games.

Despite getting out for a duck in the last match against Otago, Phillips hammered a half-century in the previous encounter against Canterbury. Though he has played just three games so far he has a strike rate close to 163. He is a risky pick here in this contest but if he plays in this match he will be looking to score big and can provide you with decent returns.

Canterbury’s leading wicket-taker, Ed Nuttall was exceptional with the ball in the last season as well. He is continuing with his lethal form this season as well and is currently the second leading wicket-taker in the tournament. Nuttall has bagged 13 Wickets in 7 games and his economy is improving with every game. He picked two scalps in the last match against Auckland and will prove to be a fruitful pick for this contest as well.

Ferguson has been consistent for the Aces taking wickets in every game possible. He has bagged 12 wickets in 7 games so far. He becomes a must-pick here for his wicket-taking ability in the shorter format. Lockie picked two scalps in the last match against Otago while repeating the same count in the last encounter against Canterbury. He comes as a handy batter done the order as well and has amassed 54 Runs with a strike rate of 135.