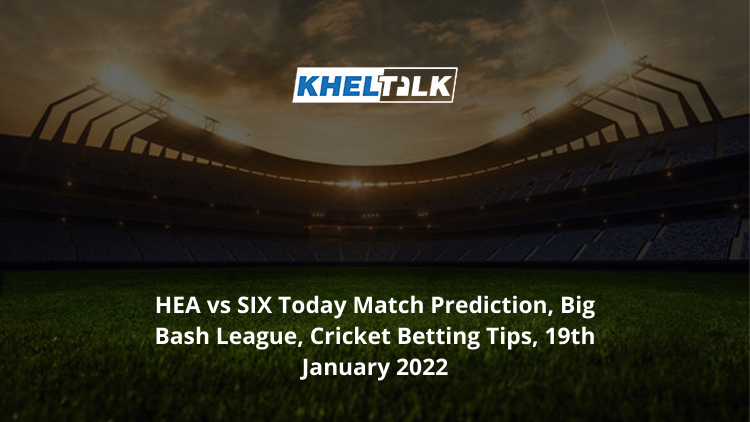 KhelTalk is the only destination that brings you the finest prediction for today match that you can trust. We are here for SIX vs REN, Today Match Prediction, Big Bash League, Online Cricket Betting Tips, which will provide every user with a clear picture of which team and in what aspect they can place their bets.

Brisbane Heat will lock horns with Sydney Sixers in the rescheduled match 36 of the Big bash League 2022 as The Gabba in Brisbane will host this fixture. Heats are currently placed at the 7th spot on the points table with 15 points. They have won just three out of the 13 games they have played so far while failing to seal the win in ten games.

They faced defeat consecutively in the last five games they played. Heat faced Perth Scorchers in their last fixture which they lost by six wickets. After batting first Heat posted a target of 155 Runs on board where opening the batting Max Bryant hammered 81 runs off 56 balls as the other batters failed to score runs with the bat.

In return, the Scorchers successfully chased the target by the end of 18 overs with six wickets still in hand. All their key bowlers failed to conceive wickets while Mitchell Swepson was the only bowler who picked two scalps for the Heat. They have had an unfortunate run in the tournament so far as their batting order is failing miserably and their key batters are also missing their natural form.

In the last fixture, we witnessed the poor form of bowlers as well. They are a strong side on paper with the likes of Tom Cooper, Heazlett, and Jack Clayton who had put up good figures in the last edition but have proved to be inconsistent with the willow this season which is making the difference for them. Chris Lynn and other big names of Heat are still missing their natural form.

Sixers currently stand at the 2nd spot on the points table with 8 wins and 4 losses in 13 league matches. One of their outing against Renegades had to be canceled courtesy of rain playing spoilsport while one match against Heat was postponed due to the Covid pandemic. However, previous to that they won their match against Brisbane Heat by 2 wickets where the Sixers bowlers summed up Heat innings to a mere total of 105 Runs.

They faced Melbourne Renegades in their last outing and defeated the latter by a margin of 45 Runs. After electing to bat first the Sixers posted a target of 150 runs on board. Jack Edwards amassed 40 Runs while Moises Henriques was just one run shy from a half-century.

In return, the Renegades were knocked over at a total of 105 Runs in 17 overs as Ben Dwarshuis starred with the bowl and went on to take a fifer. Sean Abbott picked two scalps as well. They certainly are a stronger side comparatively with their captain returning to his natural form and a stunning display of bowling in the past outing.

Cloudy skies are expected during the course of the play when both teams will come to play at The Gabba in Brisbane on Wednesday. There is a slight chance of rain playing spoilsport while the temperature will hover around 25-29°C.

The surface at the Gabba is a balanced one with equal assistance to both departments. The team winning the toss should look to bowl first as the majority of the games played on this ground have been won by the team bowling first. In the past pacers have been very successful at this venue as rain has occurred regularly over the last week, the bowl is likely to swing a lot.

HEA vs SIX, Who will win the match, Today Match Prediction

Sydney Sixers is expected to win against Brisbane Heat.

The Sixers are favorites to win their next BBL game given the current form they are in the tournament while the Brisbane Heat hasn’t played with a full-strength team and their bowling hasn’t looked very convincing.

Given the past encounters between these two, in the last 5 matches, Sixers has emerged victorious three times while the Heats bagged two wins. It won’t be easy for the Heat to get past the in-form Sixers and really need major changes in their tactics to outplay the latter.

Heazlett is currently the second leading run-scorer for Brisbane Heat in the tournament. He has scored 284 runs from his 9 outings with the best score of 49 and has a strike rate close to 125. He is was not at his best in the last match against the Scorchers and returned to the pavilion after scoring just 10 Runs. At 22 he is still very young and has managed to play some innings beyond his age for his side. He can prove to be a good pick for this contest as he will be looking to score big in this game to get back to his natural form.

In just two seasons with the Sixers, Josh Philippe has demonstrated an immense potential that has already earned him a place in the Australian Team. His high-scoring knock of 99* unbeaten in 66 balls against the Stars took his side to victory single-handedly as he timed the chase to perfection. In 55 matches he has 1601 Runs with a strike rate of 143.72 including his 430 Runs that came in the last ten matches last BBL season. He is currently the leading run-scorer for the Sixers with 406 Runs in 13 matches with a strike rate close to 143.

Bazley being a medium-fast pacer can give the ball a good rip on the Gabba pitch. He is also the leading wicket-taker for Heat and becomes a safe pick here. So far he has bagged 12 wickets in 10 matches with an economy rate of 8.03. Though he failed to pick wickets in the last match against the Scorchers he can prove to be vital in this fixture and a threat to Sixers batters.

Sean Abbott has developed into one of the most versatile bowling allrounders in Australian domestic cricket. As wicket-taking medium-fast bowler he can also strike the ball cleanly with the bat and has contributed a few runs down the order as well. He is currently the second leading wicket-taker for Sixers this season with 15 wickets with 10 matches and can surely pick one or two scalps in this contest as well.