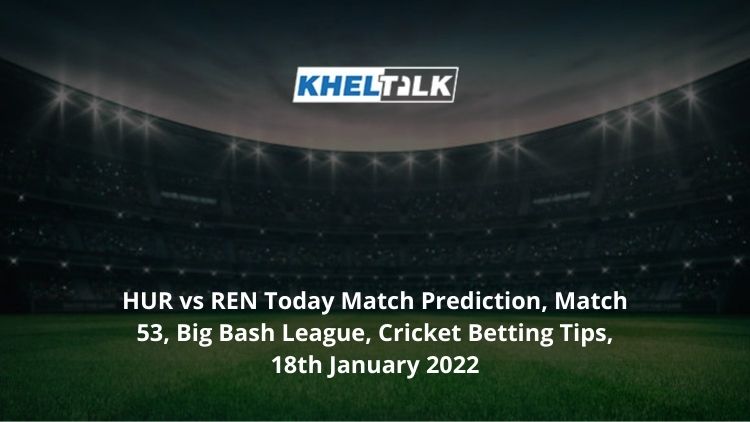 KhelTalk is the only destination that brings you the finest prediction for today’s match that you can trust. We are here for HUR vs REN, Today Match Prediction, Big Bash League 2021-22, Online Cricket Betting Tips, which will provide every user with a clear picture of which team and in what aspect they can place their bets.

Hurricanes had a bit of a shaky start to their campaign but are now back on the winning track after a win against Sydney Thunder in their last game. They are currently placed at the fifth spot in the points table with 24 points. They have six wins and an equal number of losses to their tally so far in the tournament.

They faced Sydney Thunder in their last game where Wade 83* helped the Hurricanes consolidate the fifth spot. After electing to bat first, Matthew Wade’s unbeaten 83 off 54 and Caleb Jewell’s 32-ball 51 set the platform for the Hurricanes to finish with 177/6 in their 20 overs.

In return, the Thunder were restricted to 168/9 as the Hurricane bowlers came on top with a good spell taking wickets at regular intervals. Riley Meredith and Jordan Thompson bagged three scalps each while Sandeep Lamichhane was also impressive with the ball and picked two scalps.

Renegades have had a disappointing run in this edition of BBL as they are currently placed at the bottom of the points table with 15 points. They managed to secure three wins in the 12 games they have played so far while one match had no result.

They consecutively lost their last three matches in the tournament while their recent loss came against Melbourne Stars by six wickets. After electing to bat first, the Renegades posted a target of 122 Runs by the end of 20 overs as the Stars bowlers completely overpowered them. In return, Glenn Maxwell’s 68* off 45 set the platform for the Stars to chase the given target in just 14.3 overs.

Renegades are struggling with their batting department while the bowlers are leaking way too many runs. They boast a strong bowling attack with the likes of Kane Richardson and Zahir Khan but their inconsistency is proving to be the turning point in the game for them.

The weather will be cloudy throughout the day. The temperature will be around 18-21 degrees Celcius during the contest and there are no chances of rain.

The pitch in this Docklands Stadium has been batter friendly with the average score in T20 on this pitch being 160. From the bowling perspective, the bounce in the pitch will also be helpful for the pacers and spinners as well. Batting first and putting runs on the board will be an ideal decision.

HUR vs REN, Who will win the match, Today Match Prediction

Hobart Hurricanes are expected to win this match against Melbourne Renegades.

The Hurricanes are favorites to win their next BBL game given the current form they are in the tournament while the Melbourne Renegades hasn’t played with a full-strength team and their bowling hasn’t looked very convincing. Hurricanes are coming into this game after some stunning performances from their key batters Caleb Jewell and Matthew Wade.

On the other hand, the Renegades are struggling with their bowling department as they are leaking way too many runs. They boast a strong bowling attack with the likes of Kane Richardson and Reece Topley but the other bowlers are yet to show some consistent performances. They have potential batters with the likes of Aaron Finch and Mackenzie Harvey but the collective effort while putting runs on board seems to be missing which is proving to be a turning point for them.

Matthew Wade is currently one of the top scorers for his team with 260 Runs in 10 matches. He played a captain’s knock in the last fixture against Thunder hammering 83 Runs in 54 deliveries to provide a good platform for the Hurricanes. After a series of low scores in the past few matches, he is back to his natural form will certainly be looking for a comeback and score some runs top the order.

The 21-year-old cricketer is the second-highest run-getter for Melbourne Renegade this season. The Renegade wicket-keeper has scored a total of 248 runs from eight games played averaging close to 31. However, he is yet to display his best performance this season but having played 35 matches the Australian cricketer has hammered 591 runs in BBL. There is no doubt that this young lad is one of the most promising players when it comes to the domestic format and is the safe pick here given the unexpected form of their batting lineup.

Rogers appears at his prime to take it to the next level again in this edition. He is currently the leading wicket-taker for Hurricanes with 15 wickets in 11 games and can prove to be a handy batter down the order as well. Rogers proved beneficial in the last encounter between the two teams as he finished bagging three wickets 3/24. While he gave away plenty of runs in his four overs in the last game against Sydney Thunder, he is set to make a comeback in this one.

Richardson is a permanent pick for the Renegades as a bowler as he is currently leading the bowling attack for them. He is a skillful fast bowler who can get the ball to move around and has bagged 19 wickets in 11 Matches. Richardson is also a handy lower-order batsman and can save some boundaries as well with his athleticism. He has a wide range of deliveries in his arsenal which could trouble the Hurricane batters.