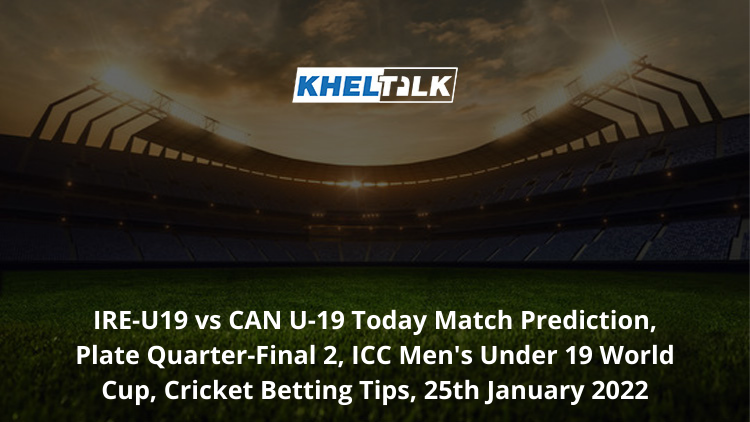 IRE-U19 vs CAN U-19 General Betting Odds

IRE-U19 vs CAN U-19 Betting Odds Comparision

KhelTalk is the only destination that brings you the finest prediction for today’s match that you can trust. We are here for IRE-U19 vs CAN-U19, Today Match Prediction, Under-19 World Cup, Online Cricket Betting Tips, which will provide every user with a clear picture of which team and in what aspect they can place their bets.

Ireland U19 will lock horns with Canada Under 19 in the Plate Quarter-Final 2 of the ICC Under-19 World Cup as Brian Lara Stadium in Trinidad will host this fixture. Ireland has won just one match out of the three games they have played so far. They faced defeat in their last match against South Africa U19 by 153 Runs.

After electing to bat first South Africa completely hammered the Irish bowlers and posted a mammoth target of 315 Runs by the end of 47 overs (D/L) losing seven of their wickets. Reuben Wilson and Liam Doherty bagged two scalps each for Ireland U19 while Jamie Forbes, Matthew Humphreys, and Scott MacBeth picked a single scalp each.

In return, the target was reduced to 312 Runs in 47 overs by the D/L method, but the whole Ireland U19 squad was knocked over at 158 in 33 overs. Nathan McGuire hammered 42 off 33, supported by Philippus le Roux  33 off 49. Matthew Humphreys also put up a fight down the order scoring 38 off 30 balls, but that was not enough to take them to the winning side.

Top Batsmen for Ireland U19-

Top Bowlers for Ireland U19-

Canda U19 is yet to register their first win in the tournament as they lost all the three matches they have played so far. They faced Bangladesh in their last match and suffered defeat by eight wickets. After electing to bat first Canada was knocked over at 136 Runs by Bangladesh.

Anoop Chima was the highest contributor for Canada scoring 63 off 117. In return, it was an easy chase for Bangladesh U19 as they successfully chased the target in 30.1 overs losing just two wickets. Parmveer Kharoud and Ethan Gibson bagged a single scalp each for Canada U19.

Top Batsmen for Canada U19-

Top Bowlers for Canada U19-

The weather at Brian Lara Stadium in Trinidad is expected to remain cloudy throughout the day and you can expect the humidity to be on the higher side like any Caribbean city. The temperature will hover around 24-30 °C while there are very low chances of rain playing spoilsport during the course of this match.

The surface at the Brian Lara Stadium is a batter’s paradise where the runs flow easily across the turf. There will be some initial help for the quick bowlers in the first half of the match. The teams batting first have posted huge scores in the recent matches played here.

IRE U19 vs CAN-U19, Who will win the match, Today Match Prediction

Ireland Under 19 is expected to win against Canada Under 19.

Having the advantage of a win in the league stages Ireland U19 is favorites to win this contest. They are a more balanced and well-settled side than Canada and have the prior experience of playing against bigger teams. Tim Tector and Joshua Cox will play a crucial role for Ireland U19 in this contest.

Canada Under 19, on the other hand, gave their everything in the league stages, but lack of experience cost them big time in winning matches against big teams.

The Irish wicketkeeper, Joshua Cox is a reliable batsman who puts a price on his wicket. He is capable of playing big shots with ease, he backed his side in the last game against Sri Lanka Under -19 scoring an unbeaten 44. Cox provides depth to Ireland’s batting lineup and has been consistent with the willow in the last series against Zimbabwe U19 as well. So far he has hammered 139 Runs in 3 Matches including a high score of 111* against Uganda U19.

Anoop Chima scored handy runs for Canada U19 in all the matches in this tournament. In 3 innings, he has smashed 147 runs at an average of 49, with the highest score of 63. Chima played a splendid knock of 63 off 117 balls in his last match agaist Bagladesh U19 to back his side to a safe total on board.

Matthew Humphreys is yet another bowler who has been performed brilliantly for Ireland U19. He picked 9 wickets in four games of the Under 19 Europe region qualifiers and became the player of the series while amassing 55 Runs at the same time. He has bagged six wickets in three matches including a best figure of 3/23.

Kharoud is a safe pick here if you want to go with any Canada U19 bowlers. He has bagged four scalps in three past games. Kharoud took two scalps against UAE U19 and one scalp each against England U19 and Bangladesh U19. He is a promisisng young bowler and has performed exceptionally well in the warm-up matches as well.