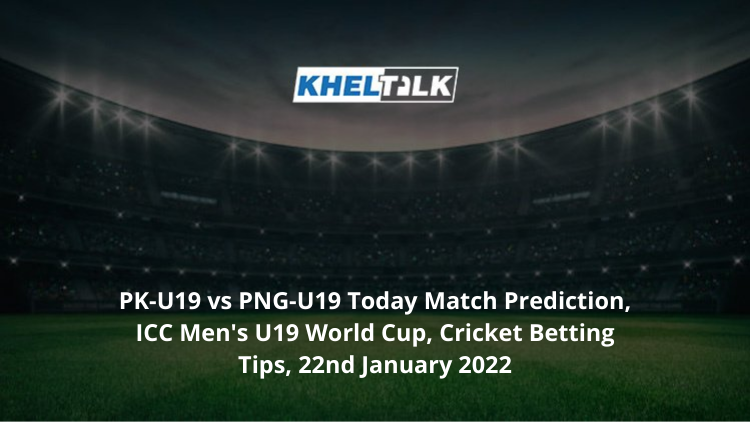 Pakistan U19 vs Papua New Guinea U19 Betting Odds

Pakistan U19 vs Papua New Guinea U19 Betting Odds Comparision

KhelTalk is the only destination that brings you the finest today’s match prediction that you can trust. We are here for PK-U19 vs PNG-U19, Today Match Prediction, ICC Men’s Under-19 World Cup, Online Cricket Betting Tips, which will provide every user with a clear picture of which team and in what aspect they can place their bets.

Pakistan U19 will lock horns with Papua New Guinea Under 19 in the ICC Men’s Under-19 World Cup as Queen’s Park Oval, Port of Spain, Trinidad will host this fixture. Pakistan has already reached the quarterfinals after defeating Afghanistan in their last match by 24 Runs. They currently sit at the top of the Group C table with two wins in two games.

They danced Afghanistan in their last match where after deciding to bat first they posted a total of 238 Runs on board by the end of 50 overs. Muhammad Shehzad provided a good start to Pakistan hammering 43 runs in 54 balls. Abdul Faseeh carried on the momentum alongside him scoring 68 off 95 while Maaz Sadaqat played an unbeaten knock of 42* coming down the order.

In, return Afghanistan was knocked over at a total of 215 Runs losing nine of their wickets. Awais Ali starred with the ball for Pakistan bagging three scalps while Qasim Akram took two scalps. They are in splendid form in the tournament and will be looking to win this contest by heavy margins to carry on their winning momentum.

Top Batsmen for Pakistan U19-

Top Bowlers for Pakistan U19-

Papua New Guinea Under19 Team made their ninth appearance in the ICC U19 Men’s CWC in the West Indies.PNG are yet to see a win as they lost both of their matches to Zimbabwe and Afghanistan by heavy margins. They currently sit at the bottom of the Group C points table with 0 points.

They face Afghanistan U19  in their last match they failed to chase a target of 200 runs. Aue Oru remained their highest contributor with 13 runs while all the other batters returned to the pavilion at single digits. Katenalaki Singi starred with the ball to provide a breakthrough for PNG U19 bagging four scalps.

The weather is expected to remain a bit cloudy throughout the course of this match while there are very less chances of rain. The temperature will hover around 24-26°C.

The pitch at Queen’s Park Oval is good for batting. The batters can play their strokes freely as the ball comes nicely onto the bat. This surface is expected to stay the same throughout the course of this match. The team winning the toss should opt to bowl first given the success rate of chasing at this venue is good.

PK- U19 vs PNG-U19, Who will win the match, Today Match Prediction

Pakistan Under 19 is expected to win this match against Papua New Guinea Under 19.

There are no second doubts that Pakistan U19 looks like the stronger and more well-settled side on paper and they are expected to come out on top PNG-Y in this fixture. They have already qualified for the quarterfinals and PNG U19 will be another weaker team on their way to defeat.

On the other hand, PNG U19 is yet struggling to garner a point on the points table. they faced a humiliating defeat as they got knocked over by Afghanistan U19 in their last fixture.

Top Batsman for Pakistan Under19- Haseebullah Khan
Haseebullah Khan is the top run-scorer for Pakistan with 137 runs at a strike rate of 82. He has struck 10 fours and 4 sixes. Though he did not contribute much with the match in the last match and got out scoring just 2 runs, he is expected to make a comeback in this fixture.

Maha has also captained the PNG side during qualification for the 2020 ICC U19 Men’s CWC. Though he didn’t play many matches against bigger cricket nations he proved his worth in the smaller circuit. He has scored 22 Runs in 2 matches while picking four wickets in the same.

Top Bowler for Pakistan Under19- Awais Khan
Awais Ali has been the best bowler for Pakistan and has picked up 9 wickets while bowling at an average of 10 and an economy rate of 5.20. He bagged three scalps in the last match against Afghanistan U19 with an impressive economy of 4.00 to take Pakistan across the winning line.

Though PNG suffered a humiliating defeat at the hands of UAE in their first fixture, Ryan Ani was impressive with the ball. He conceded 30 Runs runs in his six overs while picking a scalp. He can prove to be a fruitful pick in this fixture as well.