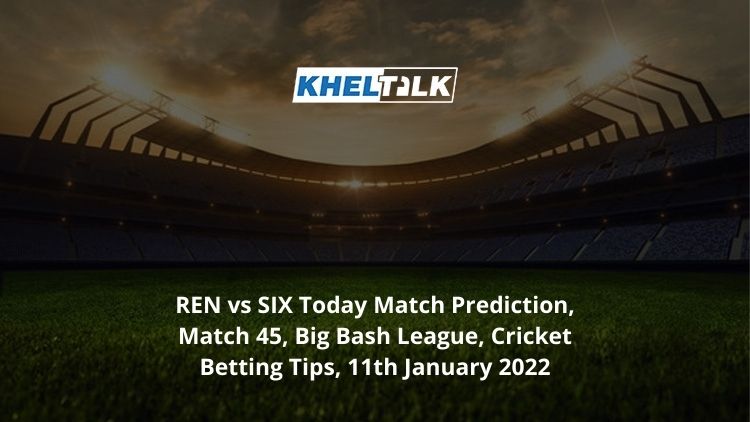 KhelTalk is the only destination that brings you the finest today’s match prediction that you can trust. We are here for REN vs SIX, Today Match Prediction, Big Bash League, Online Cricket Betting Tips, which will provide every user with a clear picture of which team and in what aspect they can place their bets.

Renegades have had a disappointing run in this edition so far as they are currently placed at the 6th spot on the points table with 15 points. They managed to secure three wins in the 10 games they have played so far while one match had no result due to being postponed. The top-order of the Hurricanes is in poor form at the moment and they really need to work on their bowling unit failing to deliver.

They faced Melbourne Stars in their last match and defeated them by 5 wickets. After electing to bat first Stars managed to post a target of 126 Runs as the Renegades bowlers displayed a feat of stunning bowling. Kane Richardson and R Topley starred with the bowl and took three scalps each while a half-century from Aaron Finch helped them secure the win.

Sixers are currently placed in the 3rd spot in the points table with 6 wins in three losses in 10 league matches. One of their outing against Renegades had to be canceled courtesy of rain playing spoilsport while one match against Heat was postponed due to the Covid pandemic. However, previous to that they won their match against Brisbane Heat by 2 wickets where the Sixers bowlers summed up Heat innings to a mere total of 105 Runs.

Sean Abbott is proving to be the star for the Sixers while picking four wickets and scoring an unbeaten 37 Runs to take his side across the winning line. Ben Dwarshuis and Hayden Kerr are also in good form as well. They faced Perth Scorchers in the last match which they lost by 5 wickets.

Sixers will welcome two new players Jackson Bird and Steve O’Keefe who will bring experience to the side. They are certainly a stronger side comparatively and will be looking to square off things against Melbourne Renegades this time as well.

The weather will remain cloudy throughout the day while humidity will be on the higher side. Overall rain is not expected during the course of this match. The temperature will hover around 18-24 °C.

The pitch at Geelong is a balanced one but the batters will have the upper hand here. One can expect both teams to go for chasing as the pitch will not change much during the course of the game. The team opting to bowl first has been quite successful in the past at this venue.

REN vs SIX, Who will win the match, Today Match Prediction

Sydney Sixers is expected to win this match against Melbourne Renegades.

With a resourceful bowling attack in their ranks, the Sixers should fancy their chances in this contest. They have a deep-seated batting line-up with the likes of James Vince and Josh Philippe. They already have four consecutive wins to back them up which makes them clear favorites to win this contest.

While Renegades are coming into this game after some bad performances from their batters, which cost them their last match. Aaron Finch is currently regaining his form which is a good sign for them as the other batters are in a similar state. Given the past encounters between these two sides, the Sixers have emerged victorious on four out of five occasions and are certainly a stronger side than Renegades in all aspects.

In just two seasons with the Sixers, Josh Philippe has demonstrated an immense potential that has already earned him a place in the Australian Team. His high-scoring knock of 99* unbeaten in 66 balls against the Stars took his side to victory single-handedly as he timed the chase to perfection. In 55 matches he has 1601 Runs with a strike rate of 143.72 including his 430 Runs that came in the last ten matches last BBL season. He is currently the leading run-scorer for the Sixers with 327 Runs in 10 matches with a strike rate close to 147.

The 24-year-old cricketer is the second-highest run-getter for Renegades this season. The Renegade wicket-keeper has scored a total of 178 runs in 10 games. However, he is yet to display his best performance in this season but having played 14 matches the Australian cricketer hammered 351 runs in the last edition at an average of 27.00. There is no doubt that this young lad is one of the most promising players when it comes to the domestic format and can be your pick for this match.

Sean Abbott has developed into one of the most versatile bowling allrounders in Australian domestic cricket. As wicket-taking medium-fast bowler he can also strike the ball cleanly with the bat and has contributed 56 Runs for his team so far. He is currently the second leading wicket-taker for Sixers this season with 13 wickets with 7 matches and can surely pick one or two scalps in this contest as well.

Richardson is currently leading the bowling attack for the Renegades. He is a skillful fast bowler who can get the ball to move around. He has picked 16 wickets in 9 Matches. Richardson is also a handy lower-order batsman and can save some boundaries as well with his athleticism. He has a wide range of deliveries in his arsenal which could trouble the Sixers batters.