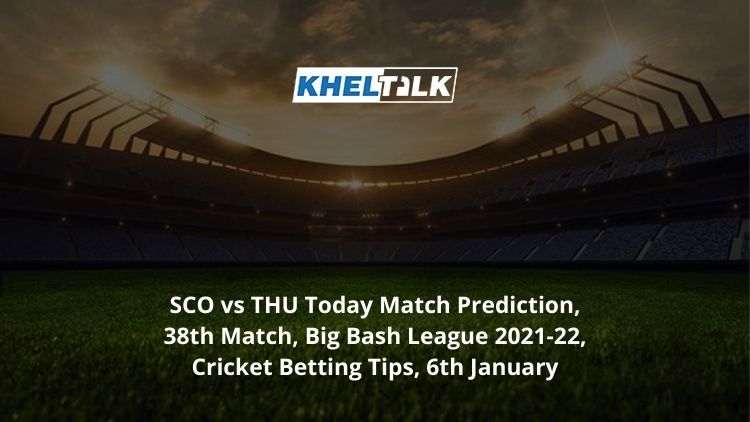 KhelTalk match tips are the only destination that brings you the finest today’s match prediction that you can trust. We are here for THU vs SCO, Today Match Prediction, Big Bash League, Online Cricket Betting Tips, which will provide every user with a clear picture of which team and in what aspect they can place their bets.

With a well-balanced side and an in-form Mitchell Marsh to fall back on, the Scorchers will start as favorites in this contest. In the last fixture against Sixers after electing to bat first Scorchers posted a target of 143 Runs on board. While their top order failed to jot down runs Aaron Hardie and Wes Agar put up a 70 odd partnership down the order to take their side to a respectable total.

In return, the bowlers performed exceptionally well to defend the low total as Daniel Christian’s quickfire of 73 Runs failed to help the Sixers seal the win. While their lead bowler, Andrew Tye was impressive with the bowl to restrict the Sixers top-order from scoring big. Tye alongside Tymal Mills picked three scalps each to take their side across the winning line.

Thunders are currently placed in the third spot on the points table with 19 points. They are getting their form back at the right moment in the tournament as they will be entering this fixture backed by the last three consecutive wins. Thunders have a star-studded batting line-up in the presence of Sam Billings, Alex Hales, Matthew Hikes who have found consistency with their batting lately in the tournament.

They faced Strikers in their last game where after electing to bat first Thunders posted a target of 172 runs. Their openers Matthew Gilkes and Cutting put up a 127 run partnership for the first wicket where Gikes played a brilliant knock of 93 Runs. In return, the Thunder’s bowlers were successful to restrict the Strikers batters to 144 all out. Mohammad Hasnain picked three scalps with an impressive 5.00 Economy while Saqib Mahmood and Jason Sangha took two scalps each.

They look in excellent form at the moment with both their departments performing well. They still have a chance to rise to the top of the points table as they have a healthy run rate of +0.653. They still need a bit of tweaking on the bowling side in order to restrict the other side for lower totals.

Cloudy skies are expected during the course of the play when both teams will come to play at Carrera Oval in Queenstown on Thursday. There is a good chance of rain playing spoilsport while the temperature will hover around 23-27°C while the humidity will remain on the higher side.

The surface at Carrera Oval is a balanced one with equal assistance to both departments. The team winning the toss should look to bowl first as the majority of the games played on this ground have been won by the team bowling first. In the past pacers have been very successful at this venue.

SCO vs THU, Who will win the match, Today Match Prediction

Perth Scorchers is expected to win against Sydney Thunder.

It has been a dream run for the Scorchers so far as they have emerged on top of every team they met in the tournament so far. With the likes of Colin Munro and Bancroft in form, their batting unit can chase or post-high totals on the board on any given day. They will be looking to carry on the same winning momentum in this fixture as well.

Munro is currently the leading run-scorer for the Scorchers. The left-handed Batsman has hammered 335 runs in 9 matches with a strike rate of close to 137 including his unbeaten 114* against the Hurricanes. So far he has amassed 805 Runs in 28 matches during his BBL career. He is currently at the pinnacle of his form and will prove to be a vital player in this match as well. Munro is one of the most destructive in terms of sheer power and ability to hit big from ball one.

Gilkes is in influential form with the bat for Sydney Thunders. He has played a few match-winning knocks in this edition for the former BBL winners including his recent knock of 93 Runs against the Strikers. So far he has amassed 225 runs in just 8 games. Looking forward to his run with the willow, Gilkes will be a player to watch out for and place your bets on. The betting players should go for a safe pick in this category and pick the top in-form batsman of Thunders, who has the highest probability to go for a demolishing knock against the heavy-duty bowling line-up of Perth Scorchers.

The Australian has been exceptional in this edition of the BBL and is currently the leading wicket-taker in the tournament. So far he has picked 16 Wickets in 9 games with a 7.66 Economy Rate. Tye starred with the ball in the last match against the Sixers picking three scalps with a 4.20 Economy rate to defend a low total for his team. He will be looking for more scalps to his tally in this fixture with his ability to bowl yorkers at will and enough variations to keep Thunder batsmen on their toes.

Mahmood is currently the second-highest wicket-taker for Thunders alongside Daniel Sams. Though the 24-year old pacer from England missed out on some games for his team earlier, he has proved to be an economical bowler with 11 wickets in 5 matches, two of which came in the last match against Adelaide Strikers. Here you can go for him to play a safe bet in this category as the Carerra pitch will definitely assist his pace and he is expected to pick one or two scalps.