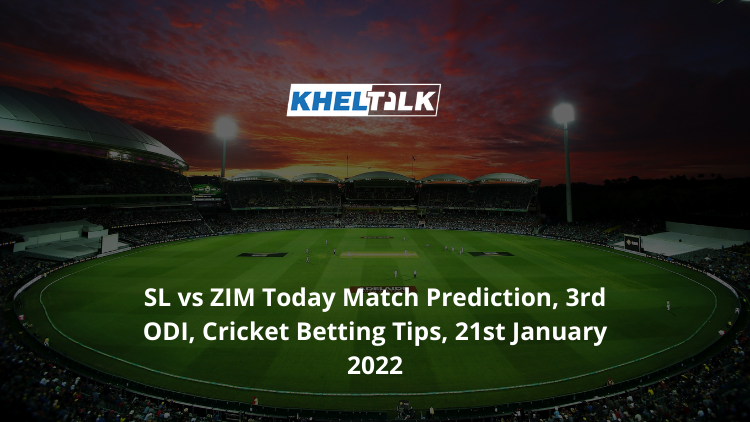 KhelTalk is the only destination that brings you the finest prediction for today’s match that you can trust. We are here for SL vs ZIM, Today Match Prediction, 3rd ODI, Online Cricket Betting Tips, which will provide every user with a clear picture of which team and in what aspect they can place their bets.

Sri Lanka will lock horns with Zimbabwe in the final of the three ODI match series as Pallekele International Cricket Stadium in Pallekele will host this match. They defeated Zimbabwe in the first ODI by a margin of 5 wickets while Zimbabwe got the better of them in the 2nd ODI by 22 runs at the same venue.

In the last game, while chasing a massive target of 302 runs, Sri Lanka witnessed a horrible start and at one point, they were 63 for 4 and really struggling. This is when the skipper Shanaka walked to the crease and took the game deeper. He stitched a partnership of 118 runs for the 5th wicket with Kamindu Mendis.

Shanaka was the lone warrior however as the required run rate kept creeping up. He got dismissed while trying to up the scoring rate and after that, it was all but over. Shanaka played a captain’s knock of 102 but his efforts went in vain as Sri Lanka fell short by 22 runs.

Zimbabwe registered a brilliant comeback to level the series 1-1 after losing their first game by a comprehensive margin. After electing to bat first, the Zimbabwean openers started off in the same fashion as they did in the first ODI. They collected 59 runs for the first wicket partnership. Regis Chakabva made a valuable contribution of 47 runs up the order.

After both the openers perished, it was Craig Ervine and Sean Williams that collected important runs in the middle overs. Sean Williams was dismissed at 48 while Ervine scored 91 as he missed out on his century. In their second innings, the bowlers did an exceptional job defending the total as Tendai Chatara and Blessing Muzarabani bagged three scalps each

Zimbabwe has shown a fantastic fighting spirit in their last match as they were able to put forward a strong team who can look to provide a similar outcome that can help them turn the tables in this contest.

The pitch at Pallekele International Cricket Stadium is a flat one as we have witnessed a high-scoring affair in both the ODIs. Chasing would be a good option for the team winning the toss as most of the games have been won while chasing on this surface. The surface is not particularly conducive to turn, while it might provide a bit of assistance to seamers as we saw in the last match.

SL vs ZIM, 3rd ODI, Who will win the match, Today Match Prediction

Sri Lanka is expected to win this match against Zimbabwe.

Sri Lanka was able to showcase a fantastic performance to start the series. However, they lost their last match by a close margin that can keep them boosted to give their all in this contest. They will be looking to bank upon all their in-form top order to make a difference against Zimbabwe in the final ODI.

On the other hand, Zimbabwe’s batters executed their shots brilliantly on a flat Pallekele track and regained confidence in the last match as the bowlers were able to defend the total posted on board. They will be looking to seal the series with a win as they have a very strong middle order with Craig Ervine, Sean Williams and, Sikandar Raza.

Batting in his preferred opening position in the first ODI, he was efficient while scoring 75 off 71 to provide Sri Lanka a good start alongside Kusal Mendis. Despite his poor form with the bat in the last ODI, he is expected to make a comeback in this contest and will pose a threat to Zimbabwe, opening the batting for Sri Lanka.

Zimbabwe skipper, Ervine played a splendid knock of 91 Runs off 98 balls in the last match. After both the openers perished, it was Craig Ervine that collected important runs and backed his side in the middle overs. Though he missed out on his century in the last game, he is in exceptional form with the willow and is a good pick to place your bets on.

Though the surface at Pallekele was a flat one with little help to the seamers, Karunaratne impressed everyone in the last match with his bowling while bagging a scalp. Karunaratne gave just 24 runs in his four overs maintaining an impressive economy of 4.00. He comes as a handy batter down the order and has amassed 239 runs with an average of 41. He is a safe pick as a bowler for Sri Lanka and can account for one or two scalps in this contest as well.

The 25-year old pacer has been impressive with the bowl for Zimbabwe in the past and can be picked for his skills. He picked three scalps in the last match with a 5.60 economy and has the potential to contribute more for Zimbabwe. He has bagged 37 Wickets in 29 matches so far and will be looking to improve his figures in this contest. Muzarabani also played a crucial role in Zimbabwe’s only second Super League win against Ireland and will be a key bowler in this contest as well.