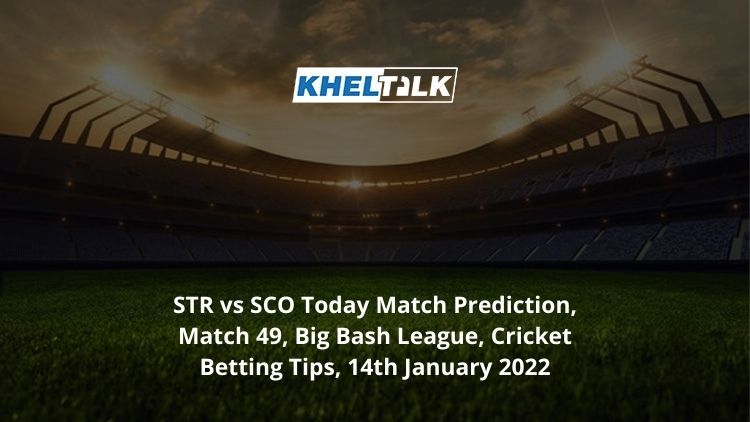 KhelTalk is the only destination that brings you the finest today’s match prediction that you can trust. We are here for STR vs SCO, Today Match Prediction, Big Bash League, Online Cricket Betting Tips, which will provide every user with a clear picture of which team and in what aspect they can place their bets.

Adelaide Strikers will lock horn with Perth Scorchers in Match 49 of the Big Bash League 2022 as Adelaide Oval in Adelaide will host this fixture. The Strikers have blown hot and cold in the tournament so far and will be heading into this game backed by a recent win against Brisbane Heat. They are currently placed in the 6th spot in the points table with 17 points.

In the previous fixture against Brisbane Heat, after electing to bat first they posted a target of 161 Runs on board. by the end of 20 overs. In return, the whole Brisbane team was knocked over at 90 Runs by the end of 15 overs as Rashid Khan created history after picking six scalps while conceding just 17 Runs in his four overs.

Khan will be a key player to look out for in this fixture as well given the lethal form he is in. They still have a chance to make a comeback in the tournament and garner some points on the points table but with the due course of the tournament, they need to work upon their batting unit.

They faced Sydney Sixers in their last game which they won by 5 wickets. After electing to bat first the Sixers posted a target of 151 Runs on board. Aston Agar took two scalps while their lead bowler Andrew Tye remained wicketless.

In return, Ashton Turner played a captain’s knock of 69 Runs as the top order got out without scoring much. Aaron Hardie also supported the skipper with his 35 Runs off 31 balls as the Scorchers successfully chased down the target in 19 overs. The Scorchers have been the most consistent team in the tournament so far and will be looking to bank upon the same in this contest as well.

Clear skies will greet both the teams as they come to play in Adelaide on Friday. The weather is going to be perfect throughout the whole match and there are very chances of any interruption by rain. The temperature will hover around 20-24 °C.

The Adelaide Oval is a good batting surface ample help on offer for the bowlers as well. The batters need to take some time to settle as the pitch may get slower as the match progresses with the new ball skidding on nicely. Buiding Partnerships will be key for both sides, with 160 runs being a good total to post at this venue.

STR vs SCO, Who will win the match, Today Match Prediction

Perth Scorchers is expected to win against Adelaide Strikers.

It has been a dream run for the Scorchers so far as they have emerged on top of most teams they met in the tournament so far. With the likes of Colin Munro and Bancroft in form, their batting unit can chase or post-high totals on the board on any given day.

On the other hand, the Strikers have a deadly bowling unit in their ranks with Rashid Khan and Peter Siddle being their star bowlers. Comparatively they lack stability in their batting unit as we have witnessed collapses many times.

Short is a creative all-rounder who can bowl handy off-spin as well. He put up a lone fight for his team in the previous encounter against Scorchers while the other players failed to perform and scored 63. This season he has scored 292 Runs in 11 matches with a high score of 72 unbeaten.

Munro has earned a reputation as one of Scorchers’ most reliable big hitters. He is currently the highest run-getter for Scorchers and has scored 353 Runs in 10 matches including a massive high score of 114* Runs in the last match against Strikers. While there are still doubts regarding his return to the team but if he plays, he certainly cannot be missed.

The Afghanistan all-rounder is in excellent touch with the bowl and brings experience to the bowling unit for his team. After his heroics in the last match which completely derailed the Heat innings, he became the leading wicket-taker in the tournament. Khan signed off from his BBL stint with career-best figures of 6 for 17 to lift Adelaide Strikers off the bottom of the table with a thumping win. He is expected to pick a scalp or two in this fixture as well and becomes a must-pick in this contest.

The Australian has been exceptional in this edition of the BBL and is currently the second leading wicket-taker in the tournament. So far he has picked 19 Wickets in 12 games with a 7.95 Economy Rate. Though his bowling figures in the past few matches have taken a dip. He will be looking for more scalps to his tally in this fixture with his ability to bowl yorkers at will and enough variations to keep Strikers batsmen on their toes.